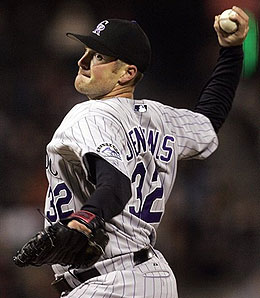 Jason Jennings will have to rediscover his Colorado form to help the Rangers avoid another losing record. (AP Photo/Ben Margot)

Well, it’s been almost four years since the Rangers gave up on the experiment, yet unbelievably, they’re still on the hook for $3 million deferred payments to A-Rod in each of the next three seasons.

The Rangers were spending money like drunken sailors during that 2000 offseason, giving $6.25 million to Andres Galarraga, $3 million to Ken Caminiti, and $4 million to Mark Petkovsek.

Galarraga would play exactly 72 games with the Rangers before being dealt to the Giants for no one of consequence; Caminiti lasted just 54 games before he was released; Petkovsek put up an unsightly 6.69 ERA in 55 games out of the Rangers’ pen before his major league career ended after the 2001 season.

And A-Rod? Well, the numbers were certainly there, but they didn’t manifest themselves in an improved record for the Rangers, and given how much Texas invested in him, it was reasonable to expect results. However, the team finished dead last in the AL West in all three seasons of A-Rod’s tenure in Texas, extending a playoff drought that dated back to 1999.

After the 2003 season, the Rangers sent Rodriguez to the Yanks and they improved to 89 wins in 2004, but have regressed since, and have still failed to make the postseason this millennium. In fact, Texas hasn’t finished higher than third in the AL West since 1999 and after a mere 75 wins in manager Ron Washington’s first season last year (the third straight sub-.500 campaign by the Rangers), clearly, there’s plenty of work still to do here.

The offense wasn’t bad in 2007, finishing fifth in the AL in runs, but with a team OBP that ranked just 11th, there’s definitely room for improvement. The fact that Sammy Sosa won’t be back – even though he’s not exactly an on-base machine – will hurt to an extent.

On the pitching side, the situation is a mess. Texas finished dead last in the American League in quality starts and ranked near the bottom in both WHIP and ERA.

So what have the Rangers done to improve themselves this offseason?

Well, they inked Jason Jennings in an effort to improve their rotation. But after an injury-plagued season in which his ERA was almost six and a half, how much help will Jennings offer?

The emergence of Marlon Byrd last season was a very pleasant surprise, and Texas further improved its outfield depth with the addition of two talented, but very troubled individuals in Milton Bradley and Josh Hamilton. David Murphy, acquired in a mid-season deal, showed great promise.

The bullpen looks like it will be much better, thanks to the signings of Kazuo Fukumori and Eddie Guardado, who join Frank Francisco, who emerged as a solid set-up man, and C.J. Wilson, who stepped up as a closer when Eric Gagne was dealt away. Joaquin Benoit broke through as a great workhorse reliever with closer potential. Even without the injured, non-tendered Akinori Otsuka , the bullpen will be a definite strength.

Gagne, of course, wasn’t the only big name to depart Texas last year. Mark Teixeira and Kenny Lofton were purged in deadline deals.

The Rangers have not been successful when adding free-agent hurlers. The team is still saddled by the Kevin Millwood deal, a real albatross given how much of a bust he’s been. Re-signing Vicente Padilla to a big-money multi-year deal sure bombed in year one.

Texas is trying desperately to build a pitching staff through the draft, taking pitchers with its first pick in four of the past five years. Unfortunately, it’s yet to translate into results. Kameron Loe has failed to develop as quickly as the team has hoped.

The Rangers had high hopes for Robinson Tejeda entering the season, but he was awful.

As for the offense, Michael Young remains a steady option, with three straight seasons batting at least .315. Ian Kinsler is on the verge of stardom, and if Brad Wilkerson can continue to recover his home run stroke, it will certainly help make up for the loss of Sosa.

A lot of things will have to break right for Texas to return to .500 in 2008, and at this point, any thoughts of the playoffs will strictly be very long-termed based.

By RotoRob
Tags: Texas Rangers
This entry was posted on Monday, January 28th, 2008 at 6:30 pm and is filed under BASEBALL, RotoRob, Team report. You can follow any responses to this entry through the RSS 2.0 feed. Both comments and pings are currently closed.