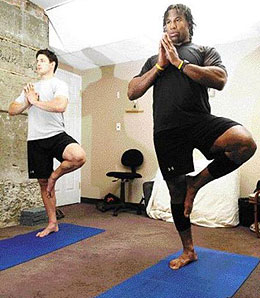 Georges Laraque, right, seen here performing the tree pose, needs to help pick up the pace for the Crosby-less Penguins.

The Montreal Canadiens, playing extremely well of late as they peck away at Ottawa’s division lead, were stopped in their tracks by the Penguins last night.

The Penguins, absolutely blazing and now the Atlantic Division leaders, waddled into Montreal – without Sidney Crosby – and shut out the Habs 2-0.

With their main man missing, the Pens had a couple of alternatives to turn to, but Georges Laraque surely wasn’t one of the candidates. Yet his nice setup in the first period led to Pittsburgh’s opening tally and what ultimately proved to the game’s winning goal. For the Montreal native, it was just his 10th point of the season – hardly the stuff fantasy dreams are made of, but it helped the Pens to a big win as they creep within shouting distance of the Eastern-leading Senators.

Pittsburgh better pray it continues to get contributions from unexpected sources. Crosby could miss a month because of a high ankle sprain.

Jeff Taffe, another rare contributor, was the recipient of Laraque’s feed. The only other goal of the game was potted by Evgeni Malkin into an empty net. Malkin has really started to pick up the pace of late, draining nine goals in nine games this month, giving him 24 for the season. He’s also just one behind Sid the Kid for the team lead in shots on goal.

Montreal outshot the Pens 31-26 and had more chances to score in general, but Dany Sabourin was outstanding in the Pittsburgh net.

For Montreal, Cristobal Huet was just slightly worse, but still good enough to earn second star for the night after turning aside 24 shots. Huet has been on fire over the past week, surrendering a mere four goals in three games while racking up a very impressive .926 save percentage. After slipping last season, Huet has proved he’s a capable No. 1 goaltender this year, and with 15 wins already, he’ll soon be breaking his personal best. Clearly, he’s over the groin problems he was dealing with last month.

Tomas Plekanec, who has been a very hot pickup recently in shallow leagues where he was still not owned, was finally slowed. He’s getting better than a point per game this month, and with 25 assists already, Plekanec is just two away from matching his personal best. Unfortunately, on Saturday, he was unable to dent the twine despite several chances.

Alexei Kovalev, enjoying a fine comeback season, has now been shut out in back-to-back games for the first time since late-November. Last week, Kovalev reached the 20-goal mark for the 11th time in his often frustrating career. He’s another must-own, obviously.

Christopher Higgins, meanwhile, continues to struggle, with just one assist in his last seven games. He was having a career year, but since potting his 15th goal two and a half weeks ago, Higgins has been in a deep funk, and as a result has been winding up on some waiver wires. He’s still getting plenty of icetime and the chances are coming, so be patient unless there’s someone clearly better out there.

Speaking of slumping, Saku Koivu has now gone five straight games without a point. It’s been a frustrating season for Koivu owners, with his numbers taking a nosedive (except his +/-, that is), yet no one is cutting him. Yet.

Andrei Markov, meanwhile, has cooled on the goal scoring front. He looked like he would absolutely shatter his career high of 13 goals, but since scoring in back-to-back games before and after Christmas, he’s managed just one tally in 10 games. That super high shooting percentage is starting to look a bit more like a normal defenceman’s accuracy rate lately.

So what’s the deal with the Habs at home? They are one of the elite teams on the road, tied for the league deal with 16 wins, yet are now just a .500 team at the Bell Centre. They took six of eight points on the road, come home and are unable to finish any of their chances. With Philadelphia charging hard for the fourth seed in the East, Montreal would be wise to let them fly on by. Of course, Philadelphia has also been better on the road than at home, especially lately, so if these two meet in the playoffs as they currently are on track to, this may be one series that both teams opt to contest at a neutral zone. Perhaps the ACC would be a good choice? It hasn’t hosted an NHL playoff game for a while.

Montreal is off until Tuesday, when Boston comes to the Bell Centre. Uh oh…another home game for the Habs, and this against a hot team that’s hungry to make a move in the Northeast. The Canadiens better start enjoying that home cooking real soon, especially with 20 of their final 35 games in Montreal.

By RotoRob
This entry was posted on Sunday, January 20th, 2008 at 8:19 pm and is filed under HOCKEY, RotoRob, Team report. You can follow any responses to this entry through the RSS 2.0 feed. You can skip to the end and leave a response. Pinging is currently not allowed.