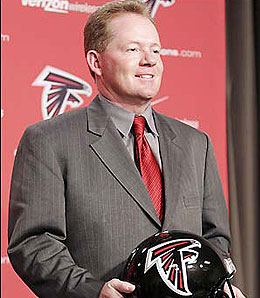 After the disaster that was Bobby Petrino, does Atlanta really want to hire another head coach from the college ranks?

Although it sounds like a very slim possibility, the fact that Southern California coach Pete Carroll and the Atlanta Falcons are still talking means there is at least some hope that the revered college coach could take over a team that’s been in free fall since 2004.

As of yesterday, according to ESPN sources, the two sides were reportedly still in contact.

Carroll, who coached the Jets to a 6-10 record in 1994 and went 28-23 at the helm of the Patriots between 1997 and 1999, has long been the topic of NFL coaching vacancies since he returned to the college ranks.

Atlanta, coming off a disaster 4-12 season, has already made poor coaching choices in Jim Mora and Bobby Petrino in recent years. Hiring Rich McKay as GM and allowing him to run the ship into the ground didn’t work out so well, either. But of course, the demoted (and not fired as he should have been) McKay will now get to hire his own replacement and micro manage them.

It’s really unclear why Carroll, who has such a sweet gig with the Trojans, would want to return to the NFL, where he didn’t exactly add to his resume, getting sacked by the Jets and allowing the Patriots to slide during his tenure. Recruiting is a snap at USC, he makes serious money and is in a great city. Why would he want to give up his rock star life to come to such a floundering organization?

Apparently, Atlanta is not only interested in Carroll as head coach, but is also considering him as its GM. Successfully handling that dual role in the NFL has tended to prove difficult for most.

It’s easy to lay blame for the Falcons’ woes on the Michael Vick fiasco, but it wasn’t Vick making poor hiring choices in recent years. He made plenty of poor choices, too, just none of them involved saddling the organization with a crappy coach.

Other dream candidates I’ve heard mentioned include Dan Reeves as GM (hell, why was he fired in the first place?) and Tony Dungy, who may want out of Indy, as coach. Imagine that as your new management team, Atlanta.

Mike Singletary and Jim Caldwell are other candidates for the coaching gig. Terrence Mathis has also been mentioned as a possibility for the general manager job. Jacksonville Jaguars defensive coordinator Mike Smith has already been interviewed for the coaching job, and there are others the team is looking at beyond Carroll.

The Falcons have a long road ahead of them to rebuild this franchise back to where it was in 2004. Is Carroll the man to lead them there? Atlanta owner Arthur Blank seems to think so.

But then again, he’s been wrong so many times before.

Of course, Carroll has publicly said he would not return to the NFL unless he was given full control of a team, and Blank isn’t exactly known for hiring people and then sitting back and letting them do their job.

This is one rumour that I’ll be shocked turn into reality, especially since some reports suggest that Carroll is already planning to turn down the opportunity to interview for the job.

Atlanta would be far better off searching the pro ranks for a coach instead of again making the mistake of trying to lure a college coach to the NFL.

By RotoRob
This entry was posted on Friday, January 11th, 2008 at 5:31 pm and is filed under FOOTBALL, RotoRob. You can follow any responses to this entry through the RSS 2.0 feed. You can skip to the end and leave a response. Pinging is currently not allowed.