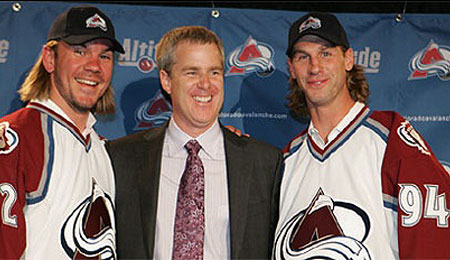 The Avalanche has suffered another major injury to a key player with Ryan Smyth, right, expected to miss the next eight weeks with a fractured ankle.

Ryan Smyth is an interesting guy. Not exactly renowned for his offensive numbers, although he put up over 30 goals his past two seasons, he’s owned by over 99.5 per cent of fantasy owners on ESPN. With his 11 goals and 17 assists, he wasn’t a bad guy to have on your roster. You might want to see if there’s anyone else out there, though. Smyth is out for the next eight weeks with a fractured ankle. It’s a tough time to play in Colorado, as Joe Sakic is expected to be out two-to-three months after having hernia surgery. Maybe the team should change its name to the Colorado Ambulance.

With Smyth out, you might want to kick the tires on New Jersey’s Jamie Langenbrunner, who put up two points in New Jersey’s win over Florida Wednesday night. While Langenbrunner’s numbers are modest (six goals and 12 assists this season), he did rack up 60 points last season, and he’s bound to heat up in New Jersey’s less defensive oriented system.

Speaking of New Jersey, former Devil back-up goalie Scott Clemmensen could be the new starter in Toronto, at least until Vesa Toskala returns from a groin strain. The fantasy implications? Well, Clemmensen is 1-1 for 2008, getting hammered by Pittsburgh Thursday. If you’re desperate for a goalie, Clemmensen is a warm body who should get some starts, but don’t expect him to have learned much from Martin Brodeur, other than the first rule of goalie club is to never let your backup play.

Meanwhile, over in Tampa, home of the NHL’s point leader and 2007 RotoRob Fantasy Hockey Stud of the Year, Vincent Lecavalier, no one else on the team seemed to be going. Martin St. Louis had one goal in the past four games. Brad Richards had one goal in the past nine games. Vinny Prospal had just two goals in the past six games. If the Lightning ever wanted to win another NHL game, it needed someone besides Lecavalier to step up. Luckily, they did Thursday against the Habs, with Prospal and St. Louis putting up a combined five points. Tampa and fantasy players needed the Lightning’s big guns to come through, and they did!

By Steven Ovadia
This entry was posted on Friday, January 4th, 2008 at 1:10 pm and is filed under HOCKEY, Ice Chips, Steven Ovadia. You can follow any responses to this entry through the RSS 2.0 feed. You can skip to the end and leave a response. Pinging is currently not allowed.