By ANDY GOLDSTEIN and DEREK JONES

Another fantasy football season went down the tubes thanks to Jason Witten just finished, so I quit let’s take a glance back at the year that was. Derek and I put our heads together to generate this list, so if you have any complaints, blame him definitely engage us in conversation through the comments. 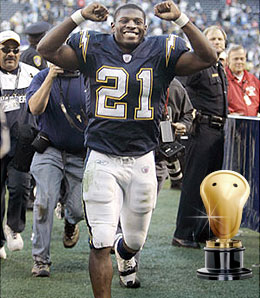 LT repeats as the RotoRob Fantasy Football Stud of the Year. (AP)

Andy – I know a certain Patrots’ quarterback will be just about everyone’s pick, but to me, LaDainian Tomlinson deserves this more than anyone else. This year was defined by excellent quarterback play. Eight quarterbacks had over 3,950 yards. Hell, some guy named Derek Anderson tossed 29 scores. Running backs, however, struggled. That means a runner with 1,900 total yards and 18 total scores ended up being way more crucial than an elite quarterback. Oh, and while you-know-who was letting down fantasy owners everywhere during their fantasy playoffs (355 yards, three scores, and three interceptions in Weeks 15 and 16 combined), Tomlinson turned on the jets, averaging 152 total yards and 1.75 scores per game between Weeks 13 and 16.

Derek – While Tom Brady detractors will bemoan his Week 15 clunker against the Jets, who was going to produce in those conditions at Foxborough? Brady’s 50-touchdown season had too many high points to simply dismiss because he couldn’t produce in conditions that are impossible to deal with. I’m sure he would have slaughtered the Jets in fair conditions. Plus, Brady was far more consistent than any other fantasy go-to guy including Tomlinson, who produced only two 100-yard outings in his first 11 games of 2007. Brady’s lack of performance in the fantasy playoffs was weather-induced. Otherwise, he was the man in 2007. 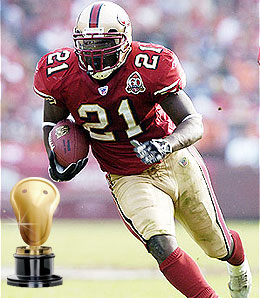 Frank Gore, who went 10 weeks without scoring a TD, gets our nod as Dud of the Year.

Andy – Injuries destroyed a number of seasons (we told you not to draft Larry Johnson), but once someone is out, fantasy owners can adjust and make back-up plans. What Willie Parker did to you this season was a flat-out kick to the groin area. Okay, I can hear you now: “Oh, wise fantasy football god, how can a running back who finished in the top five in yards be the dud of the year?” To this, I ask how many Parker owners won a fantasy title? I doubt any did in any serious league. In fact, I’d wager that more Johnson owners won titles than Parker owners. The Steelers’ back scored a measly two times, and guys like that need to be totaling over 100 total yards every game to be useful. Parker missed that mark six times, including the fateful Week 16 game of one carry for -1 yard. Sweet!

Derek – Parker is a fine choice but Frank Gore was disappointing at best. Gore went into the season on the next tier of backs after the great LT and the pretenders to the throne (Stephen Jackson, Johnson). After scoring three touchdowns in the first two weeks, Gore did not score again until Week 12. Clearly, if you spent a high pick on Gore, you paid for it dearly. On the season, the formerly electrifying Gore had just one 100-yard game. Even that came against the Bengals, which nearly doesn’t mean anything. 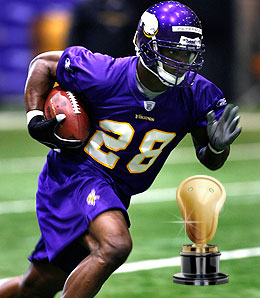 In our first unanimous selection, Adrian Peterson walks away with Rookie of the Year honours.

Andy – Look, there’s no point in getting cute. Marshawn Lynch played well, especially down the stretch. But we all know Adrian Peterson set the fantasy world on fire. Despite not starting (why!?) he finished second in rushing yards and tied for second in rushing scores. Most impressive to me, though, was the point in the season where he had around 180 carries and a 6.5 yards per carry average. That’s Jim Brown territory. Peterson still has plenty to prove about his durability and he also faded down the stretch, but if you went back to draft day knowing what you knew now, Peterson would be a first round choice.

Derek – Peterson wins this one in a walk. Who knew a team with Tavaris Jackson at quarterback would be that tolerable to watch? You can thank Peterson for that. 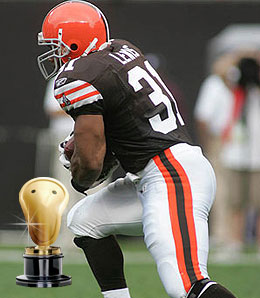 Jamal Lewis bucked the odds by coming back after a dreaded 370-carry season.

Andy – Derek and I follow FootballOutsiders.com religiously in terms of running backs that log a 370+ carry season. They suck. In fact, in almost every instance, that workload effectively ends a players career. That’s why, in my humble book, Jamal Lewis had the best comeback this year. He was one of those 370-carry guys. He had the big season, and then the injury-ravaged and ineffective following season. On top of that, Lewis tottered along for a couple more years. And in 2007, he was basically written off. I think I wrote that his ceiling was being a decent spot starter for when your top guys are on bye. Well, it turns out Lewis had other ideas. He displayed those intangibles that you can’t really forecast. He was as hungry a runner as I’ve ever seen, and it lead to a 4.4 per carry average and a consistent top-to-bottom season.

Derek – Seriously, at the beginning of the year how many people had Kurt Warner throwing 27 touchdown passes? Anyone? Anyone? I didn’t think so. Warner stepped in admirably for Matt Leinart despite being switched out with goal-line specialist Tim Rattay. Warner is one of the more fascinating players in recent NFL history. After being jettisoned by the Rams and Giants, he bided his time and showed that he still has gas in the tank. Having Anquan Boldin and Larry Fitzgerald doesn’t hurt either. By the way, who is going to be the starter for Arizona next season? 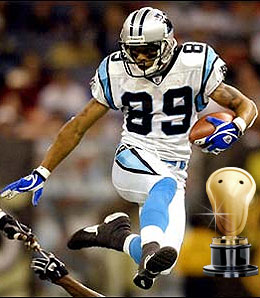 Thanks to Carolina’s carousel of crappy QBs, Steve Smith crashed and burned as a fantasy asset.

Andy – Warrick Dunn, please retire. Or at least change teams or change roles. Jerious Norwood has 201 career carries and over 1,200 yards. In other words, Norwood possesses a staggering lifetime per carry average of 6.2 yards. That’s better than Peterson was this year at 201 carries. Norwood is a home run threat who also excels at getting some tough yards. Yes, backups sometimes see a defense that is more amped up to stop the starter, so they naturally don’t approach the backup with as much fervour, but does anyone believe that happened with the 2007 Falcons? Dunn squandered 228 carries that could have gone to Norwood. Look, I know he’s a great human being and he’s done many generous things for others. Now, he should do another selfless thing: Get out of the way for someone who should be on every fantasy owner’s radar.

Derek – Steve Smith went from being an elite wide receiver to a guy who is no better than a second or third receiver. He never got into a groove thanks to the maddeningly incompetent play of Carolina’s quarterbacks. The Panthers’ passing game ranked 29th in the league. Meanwhile, the running game was middle of the road at 14th. Jake Delhomme, David Carr, Matt Moore and Vinny Testaverde decimated the collective fantasy value of any Panthers’ offensive player. In fact, fantasy owners were actually excited about the 43-year-old Testaverde raising Smith’s play. That’s simply pathetic. Thanks for the memories, guys! 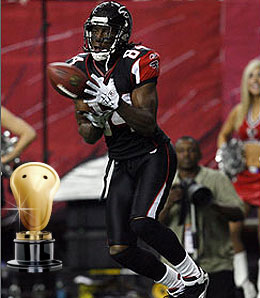 Roddy White didn’t drop too many passes this season. (By Dale Zanine, US Presswire)

Andy – This might be the toughest category this year. Peterson deserves consideration for being, at best, a fourth or fifth round pick in your fantasy draft. But it really comes down to Earnest Graham and Ryan Grant. Both started the season on exactly no one’s fantasy team. Both got their chance about halfway through the season, and both helped fantasy owners win titles. I’ll give the slight edge to Grant, who had touchdowns in each of his last six games. Graham did disappoint slightly during championship week, though it’s really nitpicking. Both players saved teams that took a waiver chance on them.

Derek – Roddy White. That’s right. Go ahead and rub your eyes. I said Roddy White. Seriously, something positive needed to develop from Atlanta’s season and it did. White quietly put together a good season with 1,202 yards receiving (which tied for eighth in the league) and six touchdown receptions. In fact, White compiled more receiving yards this season than Torry Holt, Boldin, T.J. Houshmandzadeh and Wes Welker. White produced despite having his first string quarterback end up in the clink, playing with a putrid assortment of signal callers and having his head coach quit on the team late in the season. My hat is off to you White. Viva la White! 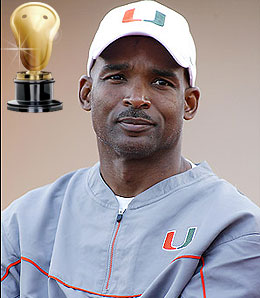 Denying his players the right to carry guns? What the hell was Randy Shannon thinking? (JC Ridley/WireImage.com)

What’s that? The Second Amendment guarantees the right of every American citizen to bear arms? Not if you’re a Miami Hurricane football player. In an effort to clean up the image of the program, head coach Randy Shannon instituted a zero tolerance policy when it comes to one of his players owning a gun. Constitutional rights be damned! It was bad enough that Shannon decided to strip the players’ names off the back of their jerseys, but no guns? If you want to go alligator hunting, or even if you’re chasing tail, you’ll just have to find a different weapon of choice. Oh man, so much for Miami producing the next Tank Johnson.

By Andy Goldstein
Tags: fantasy football
This entry was posted on Friday, January 4th, 2008 at 4:19 pm and is filed under Andy Goldstein, Derek Jones, FOOTBALL, RotoRob Awards. You can follow any responses to this entry through the RSS 2.0 feed. Both comments and pings are currently closed.