Mets Beating the Bushes for Pitching 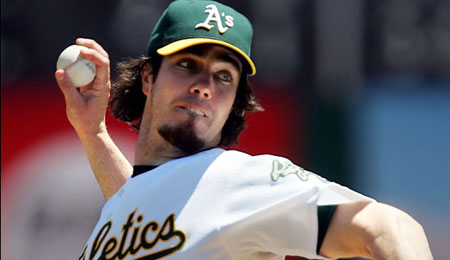 The Mets are running out of options now that they’ve lost out on acquiring Dan Haren. (AP)

Having already failed in their quest to land, either via trade or through free agency, Dan Haren, Dontrelle Willis and Hiroki Kuroda, the New York Mets’ search for starting pitching continues.

The team’s current rotation – Pedro Martinez, John Maine, Oliver Perez, Orlando Hernandez and Mike Pelfey – is good enough to compete, they insist. Yet the team continues to beat the bushes in an effort to upgrade the rotation of a team that suffered a monumental collapse in September.

Unfortunately, the Mets don’t appear to have the kind of prospects necessary to get into the Johan Santana sweepstakes or even Erik Bedard, so they may be limited to adding lesser lights.

Let’s just hope they can find better than Jose Lima, Chan Ho Park and Brian Lawrence – the three retreads New York added last offseason in the hopes that one of them would pan out.

The club has made some strides in beefing up its pen, adding Brian Stokes and Matt Wise, the latter of which was actually a decent move. And the return of a healthy Duaner Sanchez will also make a difference.

But the Mets are still no closer to upgrading the rotation.

Livan Hernandez continues to be mentioned as a good fallback candidate, and Bartolo Colon falls into the same category. Incumbent Jorge Sosa could act as an emergency starter, but again, that’s not exactly the answer the Mets are seeking.

Other options include Joe Blanton, whom the A’s are apparently peddling, Mark Prior and Kyle Lohse, the latter of whom the Mets have extended an offer to. Apparently, the club has also made inquiries about A.J. Burnett.

By RotoRob
Tags: New York Mets
This entry was posted on Thursday, December 20th, 2007 at 12:38 pm and is filed under BASEBALL, RotoRob, Team report. You can follow any responses to this entry through the RSS 2.0 feed. Both comments and pings are currently closed.