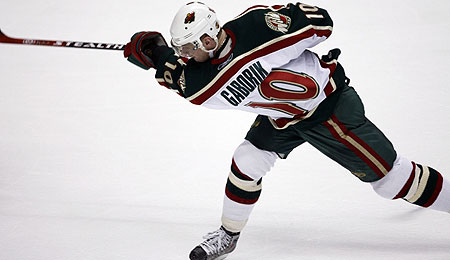 Marion Gaborik provided something to give thanks to for our Southern neighbours by acknowledging to fantasy players that he has not been up to snuff this season.

How can you not celebrate American Thanksgiving without giving thanks to someone like the Minnesota Wild’s Marian Gaborik, who actually apologized to fantasy players for his performance this season, which is about a point a game? While Gaborik’s apology was tongue-in-cheek, he sure has the right attitude. Fantasy sports isn’t about teams or players. It’s about the numbers. If the numbers aren’t there, you’re going to get waived.

And finally a player understands this. Let’s give thanks for that and hope more NHLers begin to take their fantasy responsibilities more seriously.

Over in Washington, the struggling Caps fired coach Glen Hanlon, which will hopefully improve some of the annoying numbers on the team. Obviously, Alexander Ovechkin is money in the bank, with 14 goals and nine assists. But his plus/minus rating is even, which isn’t ideal. Even more frustrating is Michael Nylander, he of 19 assists, five goals, and a -8 plus/minus. What a waste of the ability to dish the puck. And obviously, as you work your way down the Cap roster, the scoring gets less and less impressive. Maybe interim coach Bruce Boudreau will introduce the team to a more run-and-gun style. Maybe he’ll get Gaborik in to get everyone pumped about their stats.

Out in Phoenix, the Coyotes grabbed superstar back-up goalie Ilya Bryzgalov off waivers as the Anaheim Ducks somehow couldn’t find anyone willing to offer anything for a talented goalie. I still don’t understand that, but the oppressive heat of Phoenix must agree with Bryzgalov. His first game for the Coyotes was a shutout and his next start saw him making 28 saves in a 4-1 win. Bryzgalov wanted the chance to be a starter and in Phoenix, he’s going to start. If he doesn’t, they’ll probably hire a temp. So far, it seems to be a great match. There’s no reason to think he’ll cool off, even playing behind an at-times porous defense.

Speaking of goalies, let’s give some props to the perennially underrated Red Wing Chris Osgood, who’s got 10 wins and one loss in 12 starts, with a 1.65 goals against average and a .930 save percentage. These are outstanding career numbers for Osgood, who’s always been more of a solid journeyman than a destination fantasy pick. Playing in front of a mobile, puck-moving Detroit defense has got to be helping a little bit, too. Watch your back, Dom Hasek.

By Steven Ovadia
Tags: Thanksgiving
This entry was posted on Friday, November 23rd, 2007 at 7:24 pm and is filed under HOCKEY, Ice Chips, Steven Ovadia. You can follow any responses to this entry through the RSS 2.0 feed. Both comments and pings are currently closed.