Rogers Gambling on Representing Himself 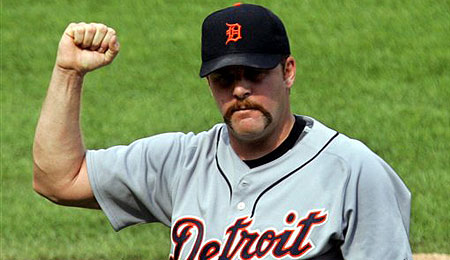 Todd Jones is back as the Tigers’ closer. Will he be saving games for Kenny Rogers?

The Gambler is betting on himself.

Kenny Rogers has ditched agent Scott Boras and has decided to represent himself in negotiations with the Detroit Tigers ” the only team he says he’ll play for if he returns for the 2008 season.

After an injury-plagued season, Rogers won’t be able to break the bank, but it’s reasonable that around $7.5 million for one year might be enough to lure him back.

Of course, Rogers told Detroit GM Dave Dombrowski that he needs time to learn the ins and outs of being an agent, so he’s asked for patience. But that’s okay, because the Tigers seem interested in having Rogers back.

Detroit has already re-signed closer Todd Jones, exercised its option on catcher Ivan Rodriguez and made deals to add shortstop Edgar Renteria and outfielder Jacque Jones, so it’s been a whirlwind offseason. Once the Tigers get Rogers back in the fold, that will likely be the end of their major moves this winter, barring a big surprise.

Last year was pretty well an anomaly for the four-time All-Star because of all the injuries Rogers had to endure. As a result, he was a bit more hittable than in 2006, and his normally good control failed him to an extent. He just turned 43 a couple of weeks ago, so how much can we can count on him from a fantasy perspective in 2008?

Well, are you willing to gamble against him? I’m not. I’m expecting him to bounce back to the mid-teens in wins with an ERA around 4.00, which should make a fine asset ” especially in AL-only leagues.

By RotoRob
This entry was posted on Tuesday, November 20th, 2007 at 8:14 pm and is filed under BASEBALL, RotoRob. You can follow any responses to this entry through the RSS 2.0 feed. You can skip to the end and leave a response. Pinging is currently not allowed.