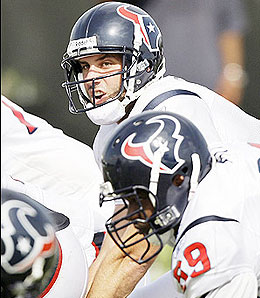 Matt Schaub should enjoy a fine game against a pourous Browns’ pass defense this week. (AP)

2. Tony Romo vs. Jets – You can almost treat Romo as you would Brady. He’s an every week starter without a doubt.

3. Ben Roethlisberger vs. Dolphins – After Romo, the next three weekly starters (Roethlisberger, Brett Favre, and Derek Anderson) are pretty much interchangeable. Roethlisberger gets the nod on these rankings due to his absurdly easy matchup. The other thing that no one is talking about is how Willie Parker has struggled over the last three weeks (2.9 yards per carry over that stretch). Maybe the Steelers’ gameplan will call for more early passing.

4. Brett Favre @ Lions – I think even Mike Martz would love to see a 45-41 final in this one. Either that or the chance to challenge whether a player went out of bounds at the 45 or 44 yard line. That’s a Martz classic.

5. Derek Anderson vs. Texans – Teams would kill for the potential triplets that the Browns have. A stud third-year wide out; a stud fifth-year tight end; and now a stud second-year quarterback. Seriously, don’t even take Brady Quinn out of the box, guys. Just take him back to the store and get what you can for him. Don’t mess with a good thing. I’m talking to you, Browns!

6. Matt Hasselbeck @ Rams – D.J. Hackett has touchdowns in three straight games and has immediately established himself as the Seahawks’ top receiving threat. He’s also helped Hasselbeck step up his play a notch.

7. Peyton Manning @ Falcons – I would write something witty here, but The Contest episode of Seinfeld is on. So Peyton loses out.

8. Carson Palmer vs. Titans – I figured Chris Henry’s return to the Bengals would have a similar impact on Palmer that Hackett’s return had on Hasselbeck. It hasn’t quite been that way, although Henry has stepped in and played well. Basically, Palmer is still having a somewhat disappointing season, but I still love him. It’ll be alright, Car.

9. Drew Brees @ Panthers – Brees has been quietly humming along, as he’s reconnected with Marques Colston. In fact, Brees really hasn’t had a bad fantasy outing since Week Five. I guess the only problem is that the Saints will need to draft a running back next year and move Reggie Bush over to the wide out slot. Yeah, I said it.

10. Matt Schaub @ Browns – Here’s my sneaky start of the week. Andre Johnson came back last week and made his presence felt immediately with a 73-yard touchdown. The Browns score a lot of points and have a terrible pass defense. It all adds up to at least 250 yards and two scores for Schaub.

11. Jon Kitna vs. Packers – The Packers’ defense has been solid week in and week out, but Kitna has a bunch of weapons at his disposal. Assuming all of those guys are healthy to go, Kitna will put up a fair amount of yards.

12. Kurt Warner vs. 49ers – News recently came out that Larry Fitzgerald is dealing with a shoulder injury. That means both Fitz and Anquan Boldin are banged up. I’m not saying Warner is a terrible option, but if he starts slowly, it could be a long day.

13. David Garrard vs. Bills – Does anyone realize Garrard has a quarterback rating of 104.6? And he has eight scores and zero interceptions?! And he’s from New Jersey!?!? It’s the perfect storm for me having a new football crush.

15. Eli Manning vs. Vikings – He’s hanging in there, but he hasn’t had a multiple touchdown game since Week Seven. That’s got to change before fantasy owners can rely on him again.

By Andy Goldstein
This entry was posted on Wednesday, November 21st, 2007 at 6:22 pm and is filed under Andy Goldstein, Cheat sheets, FOOTBALL. You can follow any responses to this entry through the RSS 2.0 feed. You can skip to the end and leave a response. Pinging is currently not allowed.