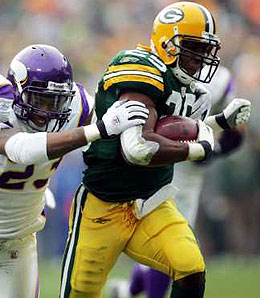 Ryan Grant and Andy are like two peas in a pod. Sort of. (Reuters/Allen Fredrickson)

1. Brian Westbrook vs. Dolphins – Domination. Westbrook is having the best year of his career, and now that a certain coloured deity is out of the picture, maybe people outside of Philadelphia will take notice. Westy seems to be good for 150 total yards and a touchdown or two every week. I’m counting on that again.

2. LaDainian Tomlinson @ Jaguars – I don’t know what emotion to have about Tomlinson. I can’t be mad at him. And it’s not like he’s worthless, so I can’t be upset. Of course, I know I can’t be happy about this year. So I sit in limbo, watching old YouTube highlight videos of the good ol’ days.

3. Joseph Addai vs. Chiefs – While Colts’ fans can’t be happy about their team’s two game losing streak, it’s really a blessing for fantasy owners of Addai and Peyton Manning. Now there’s no way they won’t be giving 100 per cent until the end of the year. And now they might be kind of angry as well. It’s really the best case scenario. I’m expecting 300 yards for Addai in this one.

4.Steven Jackson @ 49ers – He’s back! Yes! Ahem. Okay, if nothing else, Jackson seems like a safe start for the first time since, I don’t know, Week One. If he gets 25 carries and doesn’t hit the 100-yard mark, I’ll write next week’s column as a poem. And I hate poems.

5. Willie Parker @ Jets – If Parker were (a) healthy; and (b) getting goal-line carries, I’d have him at either one or two this week. Unfortunately, neither of those things are positive at the moment. It’s a shame, but Parker is becoming more like Barry Sanders to fantasy owners. Meaning, his yardage is good, but the touchdowns leave something to be desired.

6. Willis McGahee vs. Browns – One of McGahee’s two 100-yard games came against the Browns this year. Now that the Ravens are home, (and home games is where you really try, right Ray?) expect Baltimore to actually play one of their best games of the year. I see over 100 yards and one or two touchdowns for McGahee.

7. Reggie Bush @ Texans – Bush is quietly having a pretty productive stretch of games. In fact, he has four touchdowns over his last four contests. The seven carries for 17 yards against the Rams last week was a bummer, but he’s impressed me nonetheless. I’ve made my grievances with Bush known in these parts, but he’s having a solid season.

8. Brandon Jacobs @ Lions – Let’s be honest, if you had any higher expectations for Jacobs than what you’re getting out of him, then you’re an unreasonable bastard.

9. Ryan Grant vs. Panthers – Grant and I have a lot in common. He and I are both Jersey boys, of course. He played football for Notre Dame. I swam for a small school in South Jersey. He now starts for the Packers and gets paid plenty to do so. I write about football for a guy named Rob and I get paid in baseball playing cards. It’s really, like, the same.

11. Edgerrin James @ Bengals – I honestly had to consult pro-football-reference.com to make sure James had played the last three weeks. It seems as though he did, but I’d like some more proof. At least you can probably count on 80 yards and a score. That’s pretty cool!

12. Maurice Jones-Drew vs. Chargers – I’m glad Jones-Drew is safe to start every week again. Even the top-ranked run defense couldn’t slow him down. Is there any doubt that when and if Fred Taylor moves on, Jones-Drew will be a top five back?

13. Chester Taylor vs. Raiders – Oh, Purple Jesus, we will miss you. Unless you weren’t on our fantasy team, then we’re secretly relieved that we actually have a chance to win our league again. Oh well. Taylor is a decent back-up plan and all, but he’s no Jesus.

14. Marion Barber vs. Redskins – I never really know what to write about Barber. He’s a good back that has a nose for the end zone. If he got 20 carries a game, he’d be an every week starter, if he isn’t already. But I never get the impression that he could make the leap to the truly elite back status.

15. Frank Gore vs. Rams – Despite the fact that last week probably didn’t help any Gore owners win their game, I was slightly encouraged by how Gore ran. He had a bit more burst and purpose with the ball. I don’t know if that translates to his first 100-yard game of the season against the Rams, but it wouldn’t surprise me if it happened.

16. Laurence Maroney @ Bills – I don’t think I’ve made many ridiculous, earth shattering random predictions in a few weeks, so I’ll go ahead and do it here. Maroney will score twice in this game. Don’t ask me how I know. Don’t ask me what kind of drugs I’m on. I just got this sober feeling.

17. Kevin Jones vs. Giants – Seriously? Negative yards? I’m pretty sure Reno Mahe would have laughed at that performance. And that’s really bad. The Giants have a great pass rush, but you can get some rushing stats on them. I just don’t know if any fantasy owner would have the intestinal fortitude to stick with Jones this week.

18. Earnest Graham @ Falcons – I am not on the bandwagon quite yet, but I am looking for potential safe spots to land. I imagine that if you have Graham on your fantasy team, you are much more confident in using him, and that’s great. For me, I need to see one more good game.

19. Maurice Morris vs. Bears – Morris played a nice game last week, displaying that the Seahawks’ offensive line is still a strong group and Shaun Alexander’s career is over. And I never lead anyone astray.

20. Jesse Chatman @ Eagles – Is anyone else as thrilled as I am to have Ricky Williams back in the Dolphins’ fold? I mean, if there is anyone who can right a struggling ship, it’s Williams. Right. I think Colin Powell has more sway at the UN right now than Williams does with anyone.

By Andy Goldstein
This entry was posted on Saturday, November 17th, 2007 at 6:22 pm and is filed under Andy Goldstein, Cheat sheets, FOOTBALL. You can follow any responses to this entry through the RSS 2.0 feed. You can skip to the end and leave a response. Pinging is currently not allowed.