Snakes on a Playoff 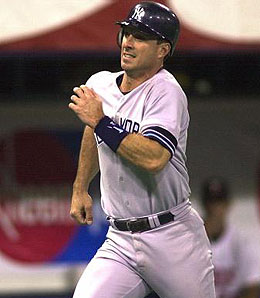 Tino Martinez temporarily broke Diamondback fans’ hearts in 2001, but the Snakes bit back.

The Diamondbacks are back in the postseason for the first time since 2002, marking the fourth trip to the playoffs in franchise history.

They open the NLCS Thursday at home against the NL Central Division Champion Cubs, the first time Arizona will square off against Chicago in the playoffs.

Of course, Arizona first tasted post-season action in 1999, becoming the first team in history to make it to the playoffs in just the second season of their history. It was home run by Todd Pratt, of all people, that ended the Snakes’ hopes that year, as they were taken out three games to two by the Mets.

Two years later, Arizona again emerged victorious in the NL West, and this time it was able to advance, knocking off the Cards in five games in the NLDS before shocking the Braves four games to one to claim the NL Championship. By making it to the World Series in Year Four, Arizona set another new MLB record.

But it was the Diamondbacks’ recovery in the World Series against an emotionally-charged Yankee team that stands out as the crowning achievement for this franchise.

After taking the first two games at home fairly easily, Arizona got edged 2-1 in Game 3. That set the drama for Games 4 and 5 in which the D-Backs lost leads in the ninth inning in both games, first on a two-run homer by Tino Martinez in Game 4 and then on a two-run homer by Scott Brosius in Game 5. The Yankees went on to win both of those dramatic games to take a 3-2 series lead heading back out West.

Arizona left little doubt that it was still alive by hammering the Pinstripers 15-2 in Game 6 to set up a seventh and deciding game. And this time, the Snakes turned the tables on the Yanks, delivering a little late-game magic of their own with two runs in bottom of the ninth that erased a 2-1 deficit and gave them a 3-2 win, and the club’s only World Series title in franchise history.

The following year, Arizona was back in the postseason after a second straight NL West Crown, but this time, it went out with a whimper, swept by the Cards in the NLDS.

By RotoRob
Tags: Arizona Diamondbacks, National League Championship Series
This entry was posted on Monday, October 1st, 2007 at 1:46 pm and is filed under BASEBALL, RotoRob. You can follow any responses to this entry through the RSS 2.0 feed. Both comments and pings are currently closed.