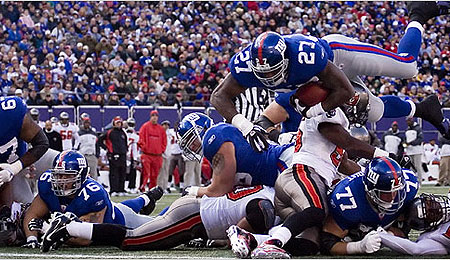 The loss of Brandon Jacobs hurt the running back depth of many owners.

I have finally moved on to football fulltime. I will finish second in my baseball league so, sorry, I can’t rename the league the James Morris Memorial League. Mostly my fault.

Anyhow, on to football. I am hoping you have some great analysis to help me with my issue.

My team looked great the first three weeks, but now it is falling apart.

I lost Brandon Jacobs after the first week, but my depth at RB seemed pretty good (Joseph Addai, Deuce McCallister, Jacobs, Adrian Peterson of the Vikings and Ladell Betts). I figured I would be okay. Well, now I hear when Jacobs comes back it might be a commitee and Deuce is out for the year. It couldn’t get worse. So, on the waiver wire there is MoJo Drew, Jerious Norwood, Kevin Jones, Chris Brown and Tatum Bell. Got any ideas who would be the best pick up?

Oh, and I lost Andre Johnson for awhile as well. There’s nobody good on wire except maybe James Jones. I picked up Patrick Crayton from Dallas. Guys like Bobby Engram, Marty Booker and Jerricho Cotchery can be had on the waiver wire as well.

If it wasn’t for Tom Brady, Addai, Petersen and the NE kicker I would probably be 1-2 instead of 0-3. I guess I shouldn’t be too upset, but man when it rains it pours.

Looking for any help.

I’d drop McCallister for someone like Brian Leonard from the Rams. Steven Jackson is out two-to-three weeks and Leonard has favourable matchup the next two weeks vs. Dallas and Arizona. Jones-Drew is just waiting for Fred Taylor to have the injury we all know is coming, but he is seeing next to nothing in terms of touches right now.

A WR sleeper has been Shaun McDonald from the Lions. But, you have to wonder if he can keep it up given their WR depth. But, I’d give him a shot as he seems to be getting the ball enough to justify it.

Which PK would you roll with? I am leaning towards Stephen Gostkowski, Jeff Reed, Nick Folk or Sebastian Janikowski.

I like Folk. Trust me…I think Brian Leonard is going to surprise some people this weekend and Folk will be getting some FGs.

By RotoRob
This entry was posted on Sunday, September 30th, 2007 at 1:18 pm and is filed under Dear RotoRob, FOOTBALL. You can follow any responses to this entry through the RSS 2.0 feed. You can skip to the end and leave a response. Pinging is currently not allowed.