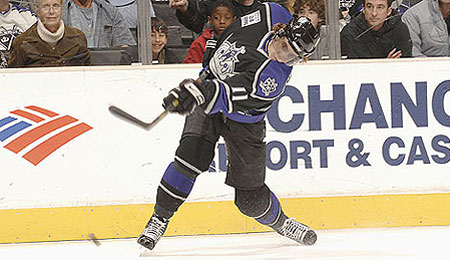 It’s the end of September and that means that it’s… well, it’s normally time for pre-season hockey, but this season’s a little different. We’re starting the NHL season a little early — on another continent, no less. I doubt Chris Pronger and Anze Kopitar will be having a pint at the London pub I used to tend bar at, but that’s another story. There are two games on the NHL schedule this weekend, and they’re both the same matchup: Anaheim vs. Los Angeles.

What do you need to know about these games? Well, if you’ve been living under a proverbial hockey rock, Teemu Selanne and Scott Niedermayer aren’t there. That’s bad news for the Ducks. And Todd Bertuzzi’s with Anaheim now, and that could be bad or good news for the Ducks.

Selanne’s loss will affect Andy MacDonald, who was Selanne’s second-best-friend-forever next to Paul Kariya. Oh, and the already depleted Ducks will also be without Jean-Sebastien Giguere (hernia) and Mathieu “Don’t call me Scott Niedermayer” Schneider (broken ankle).

So in a nutshell, the Ducks are without their top scorer (Selanne), two of their three best defensmen (Niedermayer and Schneider), their No. 1 goalie (Giguere), and, oh yeah, their shut-down forward is also out (Sammy Pahlsson).

Not so rosy in EuroDisney, eh?

As for their SoCal rivals, there’s already partying in the streets. Yes, Kings’ fan, start singing “We Are The Champions,” your Mighty Kings have won the…the Red Bull Invitational Championship over some European teams. Woo hoo. Well, something that’s just as good as winning the, um, Red Bull Cup is the fact that Dan Cloutier has been waived. Coach Marc Crawford has been playing both Jason LaBarbera and Jonathan Bernier in net, and with back-to-back games, there’s a good chance they will each start one of the games.

Up front, the Kings have mixed in a number of second-tier veterans, such as Ladislav Nagy, Kyle Calder, and Michael Handzus. Of the group, Calder’s shown the most consistent jump in the preseason. On the blueline, Brad Stuart’s logged considerable minutes, and with the usual early-season clampdown going on, Stuart should see reasonable power play time on the second unit.

Still, it’s hard to get a good sense of these two teams just based on the preseason. For your fantasy lineups, it’s best to go with the safe bets until everything shakes out. And really, since there’s only one game in the whole league per day, chances are you’ll be playing whatever SoCal players you have anyways.

The real action gets underway Wednesday and Thursday as most teams kick off their first game of the season. Let’s take a peek:

By Mike Chen
Tags: NHL
This entry was posted on Friday, September 28th, 2007 at 2:07 pm and is filed under HOCKEY, Ice Chips. You can follow any responses to this entry through the RSS 2.0 feed. Both comments and pings are currently closed.