Dear RotoRob: Down to the Wire 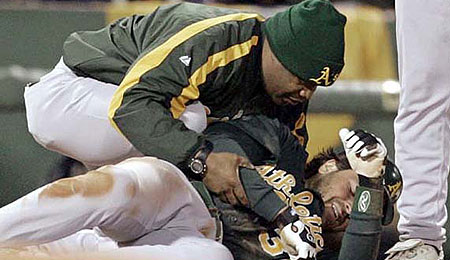 Mike Piazza is down, but not out. (Reuters/Brian Snyder)

I enjoy your article weekly.

Our season ends in about two weeks in this league.

This is my first year playing fantasy baseball and, surprisingly, I am fighting in a tight race for first in a big prize league of 13 teams. I really hope you have some time to respond. I know you are busy and I respect that.

I decided it’s about that time I should confer with an expert for some assistance and suggestions.

1. After looking at my overall and stats below (9-15-07) (Editorial note — not reproduced), what exactly is your analysis? What moves should I consider and for/with whom?

2. What do I do with my pitcher roster?

3. As for Mike Piazza, he is playing part time now, although, he does OK on those days and has got me two runs, five RBIs, and a BA of .429 the past week. His AVG is the best compared to the other players below. So, I really don’t know. However, at this point of the season and the tight race for first, maybe I just roll with him or someone from below?

What I surmise is this:

1. You probably won’t catch the guy ahead of you in steals, so don’t drop any HRs or RBI to try and get there. Same goes for ERA and WHIP.

2. Ben Sheets is as risky a pitcher as there is right now because of his injury status and the Brewers’ ability to choke. The Brew Crew are barely over .500 in their last 10 games and it is a coin flip to see if Sheets will make it to six innings lately.

3. Consider looking at dropping Kelvim Escobar and going with someone like Dustin McGowan, Clay Buchholz, or even Brian Bannister for the stretch run.

5. Your staff is straight as long as you cut loose Escobar and pick up someone to take his spot. Keep an eye on Sheets and play the match-ups. Don’t start someone just because they are starting, look at the other team and see how well they hit righties or lefties. Base your starts on season breakdowns.

If I were to make any changes I’d dump Alex Rios for Nate McLouth or Marlon Byrd today. McLouth might just give you the boost in SBs to get that extra one point in the overall standings you need to take over first place. I’d bench Kevin Youkilis (now injured), move B.J. Upton to the OF, slide Rickie Weeks into the 2B slot and play Derrek Lee in the UTIL spot. I might even look at cutting Youkilis and picking up Yunel Escobar or Mark Ellis. The playoffs are no time for loyalty and Youkilis was fizzling out before he got hurt. But, keep a very close eye on those two as they could go ice cold real quickly.

Basically, Paul, I’d be a waiver wire whore right about now if I am within a half point of the title. Pick up who is hot and ride him until the wheels fall off. Then, when they do, ride someone else until their wheels come off. Play the hot guys and bench the cold ones. Pick up the hot ones and drop the cold ones. Let someone else take a chance on Youkilis heating back up for the final week (he has been cold for the past month, BA-wise, and that is not a good thing).

I’m in a 10-team, $260, NL-only keeper league. I’m out of contention and am focusing on obtaining as many potential keepers as possible (seven keepers max). There are many rookies on the wire that I can grab for $10. Can you let me know your thoughts on whether any of the following might be worth north of $10 next year?

Long term, I really like Pie (both the player and the dessert, that is). Then you drop to Upton and Stewart, but Stewart has been rumored to be moving to either 2B or RF (I’d bet on RF as he would suck at 2B). Laroche needs to spend some time making sure his back is right this offseason. If he does that, I think he is the best option the Dodgers have at 3B.

I think what you see in Milledge right now is what you can expect from him the rest of his career. I don’t see much of a growth potential for him, and I might just leave him alone as a .280/.341/.435 OF is not anything special.

Koshansky is a true Colorado player. Away from Colorado Springs, he hit .273/.364/.442 and at home he hit .295/.380/.490 before being called up. I don’t like him long term because his numbers were down across the board when he left the friendly confines of the Rockies.

By James Morris
This entry was posted on Monday, September 24th, 2007 at 1:07 pm and is filed under BASEBALL, Dear RotoRob. You can follow any responses to this entry through the RSS 2.0 feed. You can skip to the end and leave a response. Pinging is currently not allowed.