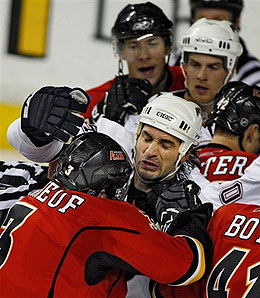 Sheldon Souray, centre, will have to fight to put up the same kind of totals for the Oilers as he did in Montreal. (AP Photo/The Canadian Press/Jeff McIntosh)

For players playing in category-based rotisserie leagues, drafting players takes on a whole new dimension. It’s not just the cumulative total of all your points anymore; suddenly, how good your overall +/- is can make or break your team’s standing.

With that in mind, the best way to approach a draft of this type is to take a comprehensive player listing, then create a list based on the context of specific categories. Let’s take a look at some of the more popular fantasy categories.

For leagues scoring power play points, there are multiple factors to consider. Any transactions over the offseason create a ripple effect; for instance, Sheldon Souray’s departure to Edmonton will surely have a negative impact on Montreal’s power play. However, Souray isn’t necessarily the cure-all to Edmonton’s disappointing power play. With less forward talent to work with, Souray’s point total should go down. Other teams that should see a dip in their power play percentage include Anaheim, the New York Islanders, New Jersey and Buffalo.

On the other hand, the Pittsburgh Penguins’ power play should be even better. That means that someone like Sergei Gonchar, who was among the league’s leaders in power play points despite being a defenseman, holds even more value. His power play partner, Ryan Whitney, will also benefit. Other teams that should have a better power play include Los Angeles (with a surprisingly high percentage considering the Kings’ overall talent level), Florida, Washington and Chicago.

Some players who score a ton don’t shoot nearly enough, such as Thornton. Others, such as Ovechkin, can’t get enough of shooting. This category’s pretty simple as player patterns don’t change that suddenly.

Some leagues reward penalty minutes despite the fact that getting a penalty’s generally considered a negative thing. If you’ve got a team of mostly skill players, it couldn’t hurt to get one player who does nothing but get PIMs. Otherwise, a balanced strategy makes the most sense – get power forwards and defensemen who like to break the rules.

Plus/minus is a difficult thing to gauge as it is such a team-based issue. However, skill players on good teams can still get a horrible +/- rating if they are a defensive liability. A good example of this is Brad Richards, who was a whopping -19 while teammates Vincent Lecavalier and Martin St. Louis were in the positive. Some players, such as Marc Savard, put up a ton of points mostly on the power play, so their +/- ranks among the league’s worst.

Players changing teams will often see a drastic change in their +/- rating. There’s simply no way Tom Preissing can get +40 again on the LA Kings. The best way to create a +/- strategy is to look at players on strong teams who score at even strength. You can grab players that even have a lousy power play percentage as long as they’re steady at even strength. Teams on their way up, such as Colorado, will give players a boost, while teams like Nashville will experience a dip.

A good goalie doesn’t necessarily make a lot of saves — he makes key saves. However, if your fantasy league gives points to someone every time a puck hits him, then you should look more at team defense than the actual skills of your starting goalie. If a goalie faces 35 shots per game and lets in three of them, that will actually provide you with more points in the save category than a goalie on a stingy team that faces 20 shots per game and lets one of them in. When Roberto Luongo was on the hapless Panthers’ teams, he was a goldmine in this category.

What’s the best way to find these goalies? There are several things to look for: Which team has weak team defense? Which team likes to play an offensive style rather than a trap? Which team takes a lot of penalties? Who plays more than your average starting goalie?

Some wild cards could be whoever winds up as the primary starter for the Phoenix Coyotes and Los Angeles Kings. Those two teams will surely see a lot of rubber fired their way.

By Mike Chen
Tags: Edmonton Oilers, Fantasy Hockey, Fantasy Hockey Tips, Sheldon Souray
This entry was posted on Monday, September 24th, 2007 at 6:43 pm and is filed under Cheat sheets, Draft strategy, HOCKEY. You can follow any responses to this entry through the RSS 2.0 feed. Both comments and pings are currently closed.