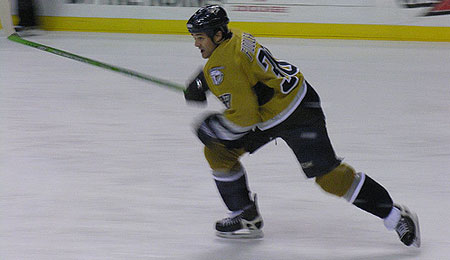 Vern Fiddler is filling in impressively with Steve Sullivan out for the Preds.

The loss of Steve Sullivan until December because of back surgery has proved serendipitous for the Nashville Predators so far this preseason.

Vern Fiddler, inserted in Sullivan’s normal spot on a line with Jason Arnott and J.P. Dumont, is more than just filling in. He’s really clicking with this pair, providing hope that the Preds have a very dangerous line on their hands.

Saturday, the trio accounted for two goals and five assists to lead Nashville to a 4-1 win over Carolina. Arnott scored the game’s opening goal and added a pair of assists, while Fiddler’s short-handed effort midway through the third put the Predators ahead and stood up as the game-winner.

Meanwhile, Chris Mason looks like he’s securing his role as the No. 1 man between the pipes for Nashville. He stopped 39 of 40 shots the Canes blasted at him, including all 18 in a first-period barrage.

But the early story this preseason has been the play of this line. In Thursday’s win over Atlanta, the trio clicked for two goals and three assists.

“We’re finding a little chemistry out there,” understated Fiddler. He enjoyed his finest season in 2006-07, scoring 11 goals and adding 15 assists. But those numbers could skyrocket this season if this line continues to click like it is so far, so it could be time to consider Fiddler a sleeper candidate.

By RotoRob
This entry was posted on Sunday, September 23rd, 2007 at 12:30 pm and is filed under HOCKEY. You can follow any responses to this entry through the RSS 2.0 feed. You can leave a response, or trackback from your own site.