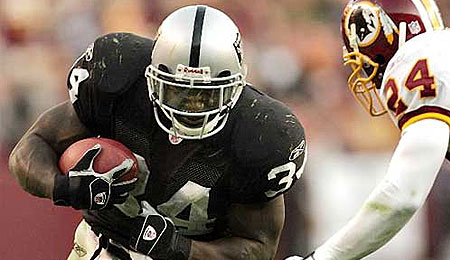 LaMont Jordan’s early-season play has him rising in the rankings.

1. LaDainian Tomlinson @ Packers – He seems due, doesn’t he? In all seriousness, you can’t freak out about Tomlinson quite yet. If he struggles this week, we can talk about dropping him down a bit, but he’s still LT for the moment.

2. Willie Parker vs. 49ers – The 49ers’ defense has looked much better thus far this season, but Parker and the Steelers will be their stiffest test so far. Parker appears destined to carry the ball way too many times this year, which is great news for the present. Next year, however, could be an issue. Follow those carry totals closely, dynasty league owners.

3. Travis Henry vs. Jaguars – For years, the Jaguars were one of the toughest teams in the league to run against. This is no longer the case. In fact, no team in the league is giving up more rushing yards per game than Jacksonville, and no running back has more yards than Henry. That’s a nice combination that should lead to 150 total yards and maybe a score.

4. Steven Jackson @ Bucs – Much like Tomlinson owners, Jackson owners should be patient. Jackson is a hard-nosed runner who should get better as the season wears on. That being said, he really needs to have more impact in the passing game. I would be shocked, however, if he didn’t score at least once this weekend.

5. Rudi Johnson @ Seahawks – Who in the world was that catching a touchdown pass last week? It was Johnson’s first career touchdown reception. In fact, he’s on pace to catch more than twice his career high in receptions, over three times as his receiving yardage high, and, well, infinite times more career touchdown catches. This is encouraging.

6. Willis McGahee vs. Cardinals – With Steve McNair and the passing game ailing in Baltimore, McGahee has been adequately consistent. He’s probably not going to have the biggest yardage game, but two scores are definitely possible.

7. Frank Gore @ Steelers – Yes, opposing running backs are averaging 3.9 yards per carry against the Steelers, but Gore showed last week he can score from anywhere on the field. It’s also nice to see Gore on pace for 24 scores, since his single-digit touchdown total last season was the only part of his stat line anyone could take fault with. Now, if we could just get the yards rolling again…

8. LaMont Jordan vs. Browns – A buddy recently asked if Jordan should be considered a top 10 running back again. At first, I scoffed, but then I thought about it more in depth. Then I made myself a cup of tea. Anyway, the point is, he’s definitely a top 20 back this season, but I doubt he’ll finish in the top 10 again. Still, that’s better than most (including yours truly) thought a month ago. Oh, and Jordan is nearly a must-start against the Browns.

9. Brian Westbrook vs. Lions – Those in yardage-heavy leagues have been loving Westbrook’s production. If, however, you were banking on touchdowns from this Eagle, you are probably somewhat sour. Still, the Lions don’t have the greatest defense in the world, and Westbrook will certainly touch the ball a ton.

10. Joseph Addai @ Texans – Believe it or not, the Texans have one of the better run defenses in the league. And don’t forget, Mario Williams was brought in specifically to deal with the Colts. Well, good luck to him, but Addai will still get a touchdown. Lock it up.

11. Shaun Alexander vs. Bengals – Hey, a washed up back going against the Bengals’ porous defense? That sounds like a recipe for 200 rushing yards. Okay, maybe not, but 100 will do.

12. Clinton Portis vs. Giants – The Giants don’t exactly have the best run defense in the league, but who cares? All I can do is pat myself on the back for nailing this whole situation. I am, to put it bluntly, awesome. And I’m modest. I’m a dual threat.

13. Laurence Maroney vs. Bills – Maroney owners have been consistently frustrated with how the 2007 season has gone so far. And that has nothing to do with spying or defensive signals. It’s more because the Patriots’ supposed top back is losing carries to Sammy Morris. I really don’t get it either. Anyway, the Bills have a terrible run defense, and if there’s any game where Maroney can re-establish himself, it’s this one.

14. Maurice Jones-Drew vs. Broncos – This might be my sneaky start of the week. Jones-Drew has done absolutely zilch through two games, which isn’t news to those who drafted him as their second back. I still consider him to be supremely talented and the Broncos have given up a league-high four rushes of over 20 yards. Big plays are Jones-Drew’s specialty, and he should be good for a long score in this game.

15. Ronnie Brown @ Jets – Brown is quickly becoming, to me, the new Thomas Jones. And that’s not a good thing at all.

16. Derrick Ward @ Redskins – Ward came in and did all that could have been expected of him with Brandon Jacobs out. That being said, he’s not quite an unbenchable stud quite yet.

17. Adrian Peterson @ Chiefs – Chester Taylor may or may not be involved much with the Vikings’ offense, but Peterson should get to tee off either way. He’s got the potential for a huge game, but worst case scenario, he still crosses paydirt.

18. Deuce McAllister vs. Titans – There’s just not much anyone can do with this situation. There’s really no reason McAllister can’t go for 75 yards and a touchdown against the Titans, except for the fact the Saints have been completely unable to accomplish much of anything so far this season.

19. Reggie Bush vs. Titans At least McAllister and Bush have stayed right on each other’s tails. Yeach…that’s all I’ve got. Oh, and Bush needs to stop jumping over defenders and leaving himself undefended against monster hits. That’s a bad thing.

20. Edgerrin James @ Ravens Of the top eight backs in rushing yards, James possesses the lowest yards per carry average. The Ravens give up 2.5 yards per carry. Colour me worried about using James this week. I know it’s tough to sit the guy, but I’d be surprised to see him get more than 60 yards or score a touchdown.

21. Marion Barber @ Bears – The dude just scores touchdowns. Of course, the Bears have only given up one score on the ground this year. This is another case of a very talented player who just doesn’t get the ball enough to be confident starting against a top defense.

22. DeShaun Foster @ Falcons – Please, don’t make me talk about this. Alright. You asked for it. The Panthers’ run game is a joke right now. It’s a running back by a committee of dunces! Hah! Wait, that’s supposed to be confederacy, right? Crap. That doesn’t fit at all. Stupid Panthers’ running situation.

23. Marshawn Lynch @ Patriots – The only hope here is that the Patriots have something of a letdown game. If they don’t, then Lynch will be held in check, and that means this isn’t the week to roll the dice on the rookie.

24. Jamal Lewis @ Raiders – Aw. Remember the good ol’ days? Notice how I did that without invoking a certain former Bills’ running back? If I see one more “I guess we’re really back in 1995!” joke from anyone, (and that includes political pundits) I will devote a whole column to how much I hate them. Rob probably won’t post that, but rest assured, I will write it.

25. Cedric Benson vs. Cowboys – Why run on the Cowboys when you can throw 40-yard plays every down? Benson gets my surprising sit head-shake of the week. Teams try to attack the opponent’s weakness, and the Bears are known for falling in love with the deep pass.

By Andy Goldstein
This entry was posted on Saturday, September 22nd, 2007 at 10:51 am and is filed under Cheat sheets, FOOTBALL. You can follow any responses to this entry through the RSS 2.0 feed. You can leave a response, or trackback from your own site.