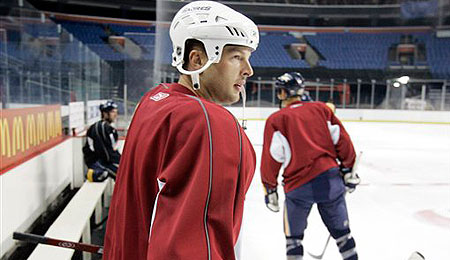 Tim Connolly, a forgotten man in Buffalo because of injuries, could prove to be a big surprise this season. (AP Photo/David Duprey)

Gearing up for your fantasy hockey draft? You’ve probably read through plenty of experts’ lists by now, and they’ve all said roughly the same thing. Here at RotoRob, we’re going to offer up something a little bit different for you fantasy hockey players. Instead of rehashing the same ol’ rankings-by-position that you’ve seen everywhere else, we’re going to go with a few things that will help your draft in the mid-to-late rounds. Today, it’s the sleeper picks, risks, and rookies. On Monday, we’ll take a look at some statistical categories that can make a big difference depending on how your league scores.

Let’s face it — the first few rounds don’t make or break your fantasy team; it’s the mid-to-late round guys who really show your fantasy prowess. With that in mind, let’s take a look at some real gems that may be overlooked by a lot of fantasy owners…

1. Tim Connolly: Who will step up in Buffalo with Chris Drury and Daniel Briere gone? People almost always forget Connolly’s still around since he’s played so little thanks to his injury woes. He’ll be looked to as one of the Sabres’ top guns, and with a system-wide emphasis on offense, Connolly should put in his share of points should he stay healthy.

2. Viktor Kozlov: Word out of Washington is that big Viktor Kozlov is generating some nice chemistry with one Alexander Ovechkin.

3. Jason LaBarbera: Honestly, would you trust Dan Cloutier at this point? (The Kings obviously don’t either, putting him on waivers on Friday.) Jean-Sebastian Aubin’s another journeyman in LA, but Jason LaBarbera’s at least got an upside. Don’t be surprised if the rebuilding Kings give him the bulk of the work — that’s not necessarily great for wins, but it’ll get you games played and saves.

4. Tom Poti: Sure, everyone’s thought of Tom Poti as a flaky player for years, but think of it this way — you’ve got Poti on the point of a power play with some combination of Ovechkin, Alexander Semin and Michael Nylander. That’s a recipe for success right there.

5. Sergei Samsonov: Left for dead in Montreal, the Hawks get to try to resurrect Samsonov’s career. Is it possible? Well, you don’t get to be a Calder winner and a 70-point guy without trying. Samsonov’s time in both Edmonton and Montreal wasn’t exactly memorable, but there’s no reason a guy with his talent can’t return to form to some degree. He’ll likely be overlooked by many fantasy drafters, so he’s a reasonable late-round pickup, especially if he’ll get ice time with Martin Havlat.

6. Marc-Edouard Vlasic: Almost every hockey pundit is looking at Matt Carle to be the power play quarterback in San Jose, but Vlasic’s a guy that scored more than a point-per-game in his last year in the QMJHL. His offensive instincts are there, and with no real pointmen established in San Jose to go with its powerful forward lineup, Vlasic’s time could be coming.

7. Brad Boyes: What an up-and-down career Brad Boyes has had so far. Despite a great rookie campaign with the Bruins, Boyes’ talents were lost in the shuffle last season and now he finds himself in St. Louis. Boyes can play a number of positions, but he’s primarily a centre, which means he’s technically behind aging Doug Weight on the St. Louis depth chart. However, Boyes’ passing vision and youth means that he could be out on the power play over Weight.

8. Hannu Toivenen: Another Bruin cast aside into St. Louis, Toivenen enters a situation where Manny Legace’s grip on the starting spot is tenuous at best. Toivenen’s got youth and skill on his side and will probably play at least 40 games.

9. Petr Sykora: Petr, you’ve just been placed on a line with Sidney Crosby. Don’t be like Mark Bell last year and blow your big opportunity.

10. Michel Ouellet: Ouellet starts the season penciled in on Brad Richards’ wing. Does that mean he’ll stay there? Who knows, but at least Ouellet’s got a better chance for success than most forwards.

Ready to gamble? Here are 10 players you should avoid drafting in the early rounds, despite the temptation.

1. Daniel Briere: Daniel Briere will probably centre Simon Gagne and get all the power play time he wants — so why does he still seem like a risk? Probably because the Flyers aren’t anywhere near as good as the Sabres were last season, and they won’t be flying (no pun intended) down the ice off the rush like Buffalo’s system dictates. How does that translate into simple terms? One word: overpaid.

2. Chris Drury: Not to bag strictly on the big-market free agent signings, but has anyone else noticed Chris Drury’s regular season point totals? Yes, he’s a clutch player, but he’s not going to get a point-per-game, so many fantasy players will probably overvalue him.

3. Scott Niedermayer: Even if he returns, last year’s Conn Smyth winner isn’t worth the high draft pick that he’d normally require. Put it this way — if Niedermayer decides to return in November, then he won’t really be in game shape until December, and by then his total point output may max out around 40 to 50. Why not use your high pick on a top-flight forward and draft a comparable defenseman in a later round? However, if Niedermayer remains undrafted late, he might be worth picking up and holding on to in your reserves.

4. Markus Naslund: Some players just tail off dramatically after they turn a certain age and that seems to be the case with Markus Naslund. If Naslund played on a more offensive-oriented team, maybe he’d find his groove again. However, despite the fact that this is a contract year, don’t look for Naslund to have a resurgence until after he signs with another team that may be able to reactivate his skills.

5. Marc-Andre Bergeron: Bergeron went on a tear after arriving in Long Island, but much of the talent that was helping him out on the Islanders’ power play is gone. There’s simply no way Bergeron can perform at the pace Isles’ fans saw him go at during the stretch drive last season, especially with the disappearence of Jason Blake and Ryan Smyth. Speaking of those two…

6. Jason Blake: How do you jump from a 25-goal guy to a 40-goal guy at the age of 34? A spike in statistics is one thing, but history tells us that over-30 players who get a magical bump in goals don’t sustain it; expect a market correction once Blake puts on the Blue and White.

7. Ryan Smyth: Similar to Drury, Smyth’s one of those intangible guys who’s solid, clutch, but never put up superstar numbers despite earning a monster salary. Look past the off-season hype and focus in on his numbers: Smyth’s never put up the same points to make him a true early-round draft pick.

8. Niklas Backstrom: Call me cynical, but while I think Backstrom’s a good goalie, I don’t believe he’s quite as good as his numbers suggested last year. He’s definitely draft-worthy, but I wouldn’t stick him up in the top five in the league like some fantasy prognosticators do; after all, much of his fantasy statistics will depend on the team in front of him and that lineup is awfully hard to predict.

9. Mike Modano: Who has a harder time scoring than the Vancouver Canucks? Why, it’s the Dallas Stars, led by Mike Modano. While his points-per-game pace put him on top of the Stars’ roster last year (and really, that wasn’t that hard), much of the offensive support he had just a few seasons ago is gone and his age is starting to catch up with his great stride. Should he play a full season, Modano will probably top out around 60 points, but beware of the injury bug. Hey, at least he won’t have to watch listless Eric Lindros skate around anymore.

10. Dustin Penner: The Penner RFA signing was almost universally panned by hockey observers and Oilers’ fans alike and there’s plenty of reasons why you should avoid Penner until the late rounds. His upside may be 30 goals, but Ducks’ fans are quick to remark about how Corey Perry and Ryan Getzlaf really carried Penner for much of his statistics. Even if Penner gets to play with talented forwards such as Ales Hemsky, there’s no guarantee he’ll have the same chemistry as he had on the Ducks.

Cream of the Crop: Rookies to Watch

Towards the end of the draft, you could either go for third/fourth line guys with an upside or you can gamble on rookies who may surprise you. Watch for these rookies — they’ll all get an opportunity to make an impact on the big club.

Nicklas Backstrom: No, not the guy in net for Minnesota (check the spelling of the first name). This Backstrom’s the future centre for Ovechkin — and if he’s good enough and lucky enough, that future might be now, so watch out Kozlov and Nylander, because your spot may be taken soon.

Jonathan Toews: Don’t worry too much about Toews’ broken finger — this guy will still play the bulk of the season in Chicago, and the Hawks are talent-starved enough that Toews will get every opportunity to let his offensive creativity shine. Robert Lang’s currently penciled in to be Havlat’s centre, but Lang’s recent inconsistency and Toews’ upside means that the rookie could be regularly skating with an All-Star.

Peter Mueller: Quick, name a Phoenix Coyote forward that’s not Shane Doan. Having problems? Well, part of the reason for that is because Phoenix is undergoing a severe rebuilding process. The good news for Peter Mueller is that he’ll get the opportunity to have pretty much all the ice time he wants. The bad news is that he won’t be surrounded by much help. Still, Mueller’s inherent abilities and the Coyotes’ lack of depth means that there’s a good chance he’ll will put up good numbers — someone has to, after all.

Patrick Kane: Like Toews, Patrick Kane is an infusion of much-needed skill and youth on a very up-and-down Blackhawks’ roster. Other than Havlat, the Hawks have no sure things, which means the door will be wide open for a high draft pick such as Kane to steal a little spotlight.

Bobby Ryan: One of the big reasons why the Ducks could toss Joffrey Lupol into the Chris Pronger deal, Bobby Ryan’s finally getting a look at the big leagues. He may last longer than expected if Teemu Selanne officially retires or Todd Bertuzzi’s oft-injured back acts up again (or if Bertuzzi just continues to suck). Could Ryan replace Penner on the Perry-Getzlaf line?

Jack Johnson: The next big thing in LA may experience a standard learning curve that comes with being an NHL defenseman. However, his tutelage under Rob Blake will most likely include power play time, and he should at least be a regular for second-unit work. He may get an awful +/-, but he may also get enough ice time to put up some solid numbers.

Devin Setoguchi: Setoguchi rebounded from a pretty severe knee injury to put up impressive numbers last season. This year, with a few question marks on the Sharks’ top two lines (Setoguchi, Steve Bernier, Ryan Clowe, Jeremy Roenick, Joe Pavelski, and a few others should all get their opportunity with the way Ron Wilson tinkers with his lines), Setoguchi’s creativity, speed, and puck skills might land him a nice spot next to either Joe Thornton or Patrick Marleau.

On Monday, we’ll look at specific fantasy categories such as power play points and shots on goal — and the players that excel at each of them.

By Mike Chen
Tags: Tim Connolly
This entry was posted on Friday, September 21st, 2007 at 7:15 pm and is filed under Cheat sheets, HOCKEY. You can follow any responses to this entry through the RSS 2.0 feed. Both comments and pings are currently closed.