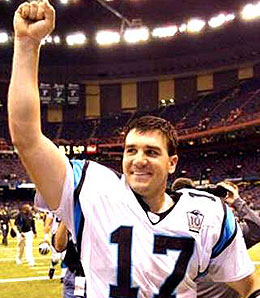 Jake Delhomme’s re-emergence as a legitimate fantasy quarterback has been a big shock.

1. Carson Palmer @ Seahawks – Yes, it’s early, but Palmer is jones-ing to make me very smart. He’s finding Chad Johnson and T.J. Houshmandzadeh with alarming accuracy. He even utilized Rudi Johnson for a touchdown reception last week. Clearly, this is an offense working on all cylinders. If the Seahawks hold Palmer to under 300 yards, it will be an awesome feat.

2. Peyton Manning @ Texans – Manning and the Colts are humming right along, although many of us were expecting more last week. Still, the only real question with Manning is where in the top five he’ll finish this season.

3. Tom Brady vs. Bills – Randy Moss has rebounded nicely, resuming some of the talk about him being the second-best wide out in NFL history. Time will tell how that argument plays out, but somehow he’s nearly managed to legitimize past Patriots\’ Super Bowls. I’m not really sure how it all works, but that’s got to count for something.

4. Vince Young @ Saints – Okay, this is obviously a gutshot pick, but there are some unfriendly matchups out there, and I think Young showed us something last week. The Saints are the worst team against the pass at the moment (opposing quarterbacks have an absurd 137.1 rating against them) which is all I need to put Young as a must start this week. If he chips in with 50 rushing yards and a touchdown, it’ll be gravy.

5. Jake Delhomme @ Falcons – At the start of the season, I figured Delhomme would be halfway towards a benching by this point. I couldn’t have been more wrong. He and Steve Smith have regained their previous elite form and Delhomme has been a super surprise through two games. The Falcons are reeling and Delhomith (copyright pending) should continue to roll.

6. Tony Romo @ Bears – Romo has been as good as any signal caller this season, but the Bears aren’t the best place for quarterbacks to go. Still, it’s hard to deny a player who gets to throw to Terrell Owens and Jason Witten.

7. Marc Bulger @ Bucs – As expected, Bulger did just fine with Orlando Pace out of the lineup. Even more impressive, the Rams\’ quarterback hasn’t thrown an interception through two games. That’s a good sign that last year’s discipline has returned. Use Bulger with confidence.

8. Ben Roethlisberger vs. 49ers – If the Steelers were ever involved in a closer game, Roethlisberger would probably be a top five fantasy quarterback. Roethlisberger is in a situation where the team is just playing too well. The 49ers are undefeated, so I have hopes that the game won’t be over by the fourth quarter.

9. Jon Kitna @ Eagles – This is one of those bad matchups I mentioned earlier. Opposing QBs have a measly 65.2 rating against the Eagles. Also, Kitna was banged up in his game last week, and apparently needed divine intervention to get back into the game. Yeah, don’t ask me. Anyway, four wide outs or not, monitor his status this week and be prepared with a back-up plan.

10. Matt Hasselbeck vs. Bengals – I pegged Hasselbeck as a bust before the season started and the jury is still out on that. This game, however, should lead to a good number of fireworks. And, frankly, if Derek Anderson can toss five scores, Hasselbeck should be good for at least two.

11. Matt Leinart @ Ravens – The Cardinals looked a little bit better last week after that dreadful Week One performance. Leinart even nearly broke the 300-yard mark. He also threw an interception, which is a concern. But that’s the way it will be for Leinart and the Cardinals this year.

12. Derek Anderson @ Raiders So much for the Raiders being a top pass defense. Through two games, they are allowing nearly 280 yards through the air. Anderson had five TD passes last week, so he’ll be in plenty of starting lineups this week. I’m not saying he can’t contribute, but don’t go overboard. He’s a weak option at best.

13. Donvan McNabb vs. Lions – I fully expect McNabb to break out of his funk at some point. If he does it against the Lions, he’ll be one of the top options this week. Unfortunately, you fantasy owners can’t afford to waste starts and McNabb should probably be used after he shows he has broken the slump.

14. Philip Rivers @ Packers – Much like McNabb, Rivers has shown us no reason to start him this week. It’s just a matter of sitting him until things pick up.

15. Rex Grossman vs. Cowboys – Okay, this is sort of a sneaky start to me. Everyone and their grandmother knows the Grossman story. That being said, the Cowboys’ biggest weakness is the deep passing game, and that’s the only part of Grossman’s game that is dangerous. If you want to gamble on a quarterback who could have a big game, it’s Grossman.

By Andy Goldstein
This entry was posted on Thursday, September 20th, 2007 at 11:22 am and is filed under Cheat sheets, FOOTBALL. You can follow any responses to this entry through the RSS 2.0 feed. You can leave a response, or trackback from your own site.