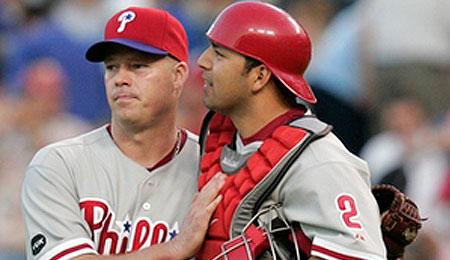 It’s been a tough year for Rod Barajas, right. First, he lost his lover, Jon Lieber, then he lost his job. Last night, Barajas got some redemption. (Dick Whipple/Associated Press)

The Phillies are breathing down the Mets’ backs again and last night, at least, they relied on the contributions of several unlikely players to help win a crazy game against the Cardinals. In today’s Daily Dose, we explore a tightening situation in the NL East.

Bartolo Colon’s misery goes on; Greg Maddux is without peer; Craig Hansen will try to revitalize his career in the AFL; Micah Owings tossed a gem; the clock is ticking for Jeremy Guthrie; Ben Sheets is hurt — again; Tommy John surgery may be awaiting Danys Baez; and Albert Pujuls was unable to start last night.

If you can’t decide between Star Wars and Star Trek, check this out; if you need fantasy baseball tidbits coming out of the wazoo, check out the Dose.

By RotoRob
This entry was posted on Wednesday, September 19th, 2007 at 12:06 pm and is filed under BASEBALL, MLB Daily Dose. You can follow any responses to this entry through the RSS 2.0 feed. You can skip to the end and leave a response. Pinging is currently not allowed.