Will Suns Break up Big Three? 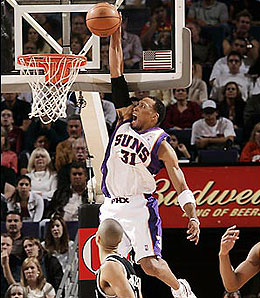 Are the Suns serious about moving Shawn Marion to Utah?

Rumours that the Suns are considering trading Shawn Marion to Utah for Andrei Kirilenko just won’t see to go away.

On the one hand, it’s an exchange of two players who truly need fresh starts.

Marion has potentially worn out his welcome in Phoenix by moaning about his place within the offensive system and the lack of respect he’s getting from the team. But that doesn’t hold much water considering that, at $16.4 million, he made more than any other Sun last season. Also, he led the team in minutes played last year and was given more shots than either Steve Nash or Amare Stoudemire.

So what’s his deal, exactly?

Meanwhile, AK-47’s horrible season and playoff meltdown has been well documented. But he’s a multi-talented player who could thrive in a new environment. Putting Kirilenko and Boris Diaw together would create massive mismatch problems for opponents given how stellar defensively each player is.

But on the other hand, Phoenix knows its window for an NBA title will be shutting soon as Nash ages. And keeping Nash, Stoudemire and Marion together represents the team’s best chance to win a championship.

Could the fact that the Matrix can opt out of his deal after 2007-08 be a factor here? The truth is, if you believe East Valley Tribune columnist Scott Bordow at any rate, that the addition of Grant Hill and the touches and spotlight he’ll receive make the Suns’ brass worried that Marion’s bitching will get louder.

Chemistry is a vital consideration for teams with championship aspirations, and if the Matrix isn’t going to fit in, maybe moving him would be a wise idea.

Reportedly, if Utah is willing to swallow Marcus Banks’ contract as part of the deal, this trade will definitely have legs.

In other Suns’ news, last month, Stoudemire was announced as the cover boy for Sony’s NBA ’08 Franchise video game, due out next month. This will be his second cover appearance on the game. After his breakout 2004-05 season, Stat was selected to don the box of NBA ’06, and we all know what happened to him that season. What is it with these video games and their jinxes?

If I’m an agent, I say screw the commission. I want my client to be healthy. I guess it’s a good thing I’m not an agent, huh?

By RotoRob
This entry was posted on Thursday, September 13th, 2007 at 2:45 pm and is filed under BASKETBALL, Rumours. You can follow any responses to this entry through the RSS 2.0 feed. You can skip to the end and leave a response. Pinging is currently not allowed.