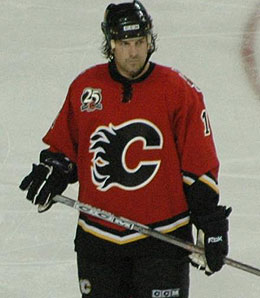 Tony Amonte’s career as a Flame is over.

Congrats to RotoRob hockey writer Mike Chen on his marriage yesterday. In honour of him going off and tying the knot and all that wonderful stuff, let’s talk some hockey today, specifically a summer of fairly significant change for the Calgary Flames.

After getting knocked out by the Detroit Red Wings in the opening round of the playoffs last spring, some alteration of the Flames’ lineup was likely in order.

Tony Amonte (a possibility to land in Chicago or Ottawa) is gone; fellow forwards Jeff Friesen and Darren McCarty have similarly departed.

Free agent defections include defensemen Roman Hamrlik and Brad Stuart, while Andrei Zyuzin was dealt to the Hawks.

Newcomers include Adrian Aucoin, Cory Sarich and Anders Eriksson on defense, with Owen Nolan brought in to beef up the attack.

The team is considered a bit more gritty now, which is exactly the way GM Darryl Sutter wants things.

To add to that edge, “Iron” Mike Keenan has taken over behind the bench – a move that surprised many, but one designed specifically to mould this club into one that will go deeper into the playoffs.

By RotoRob
This entry was posted on Sunday, September 9th, 2007 at 10:38 am and is filed under HOCKEY, Team report. You can follow any responses to this entry through the RSS 2.0 feed. You can leave a response, or trackback from your own site.