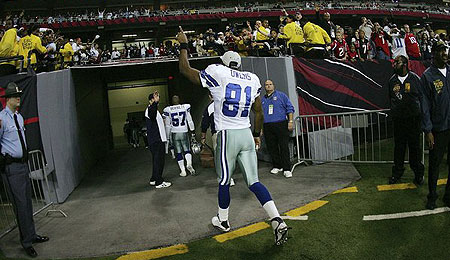 T.O.’s penchant for shining against the Giants makes him one of the first week’s top wide receiver bets.

1. Steve Smith vs. Rams – The Rams have spent millions of dollars to fix their run defense over the past few seasons, which was 31st in the NFL last season. Carolina likes to use the run to set up the pass. If the Panthers can muster a running game, it’ll be play action city all day long. When that happens, Smith can go crazy. Look for him to pick up over 100 yards receiving and at least a touchdown. In an ’06 meeting against the Rams, he caught four passes for 90 yards and a score.

2. Terrell Owens vs. Giants – Owens caught 14 balls and a touchdown in two games against the Giants in 2006. Despite his desire to have Peyton Manning or Donovan McNabb throwing the football to him, he’ll have to settle for Tony Romo. I think you’ll survive, T.O.

3. Anquan Boldin vs. 49ers – Boldin may benefit more than Larry Fitzgerald with Ken Whisenhunt at the helm. Look for the Cardinals to find ways to get the ball into Boldin’s hands. He scored in the first game between these two teams last season. Expect that to happen again and maybe a 100 yards or so, to boot. High-priced cornerback Nate Clements may get a workout.

4. Torry Holt vs. Panthers – I sure hope the Rams watched the Saints-Colts drubbing on Thursday night. Protect the quarterback! If Marc Bulger has time to throw, Holt should be in store for a big game. This is, of course, assuming that his knee is some shade of healthy. He’s a gamer and played last season banged up. He’ll be ready to go.

5. Larry Fitzgerald vs. 49ers – We’ll see if the hype about the 49ers defense is valid. Fitz beat up the 49ers defense twice last season with 133 yards in the first game and over 90 yards and a score in the second meeting. He’ll give the 49ers revamped secondary a workout.

6. Chad Johnson vs. Ravens – You know it’s football season when you hear the Ravens talking about how they are going to strip teams of their manhood and dignity. That may have to be delayed by a week against the Bengals. In the past, No. 85 has had success against a very good Ravens defense. At home, look for him to pick up a score and close to 100 yards.

7. Javon Walker vs. Buffalo – The Jay Cutler-to-Walker combination could help lead Denver into the playoffs. Buffalo’s secondary ranked seventh in the league last season against the pass. Minus Nate Clements, that is not going to be an easy feat to duplicate. Walker should be able to make some big plays against the Bills secondary.

8. Andre Johnson vs. Chiefs – So much attention in this game is being paid to the Larry Johnson factor. People seemingly have forgotten about the other big issue in the game and that is Matt Schaub. He looked pretty good in the preseason and Johnson should benefit. If the show Hard Knocks was any indication, this Chiefs team could be in trouble.

9. T.J. Houshmandzadeh vs. Ravens – The Ravens defense might get a bit busy trying to rearrange Chad Johnson’s social calendar. Hence, Housh will shine against the Ravens once again. He scored once in each game versus Baltimore last season.

10. Hines Ward vs. Browns – Offensive coordinator Bruce Arians says the Steelers will air it out a bit more this season. This philosophy should help Ward be successful especially against the horrible Browns.

11. Plaxico Burress vs. Cowboys – He only caught eight passes in the two games against Dallas, but he scored twice. He’ll test Dallas deep. Hopefully for his sake, the other Manning cooperates.

14. Roy Williams vs. Raiders – The number one defense against the pass last year? The Raiders. I don’t think it’s going to be that easy for the Lions to move the ball through the air against this team without a sturdy running game.

15. Santana Moss vs. Dolphins – The Redskins offense seems to be feast or famine which perfectly sums up Moss’s seasons. He’s the biggest threat in the passing game and the Redskins will get the ball into his hands often.

16. Reggie Brown vs. Packers – He was MIA during the preseason. I’m guessing that will change against the Packers.

17. Laveraneus Coles vs. Patriots – Coles said that the Jets offense will take years off of his career. Before his retirement, he’ll have to coax his quarterback into throwing passes more than 10 yards downfield.

18. Braylon Edwards vs. Steelers – It’s a shame that Edwards cannot find a consistent quarterback to play with. Until that happens, you can’t expect wonders from the former Michigan Wolverine receiver.

19. D.J. Hackett vs. Tampa Bay – He’s one of the “sleeper” candidates this season. Hopefully, the Seattle passing game is awake without Darrell Jackson.

20. Joey Galloway vs. Seattle – How do you think Galloway feels about Jeff Garcia throwing him the ball instead of Bruce Gradkowski? I think he’s okay with that.

The best of the rest…

By Derek Jones
This entry was posted on Saturday, September 8th, 2007 at 1:25 pm and is filed under Cheat sheets, FOOTBALL. You can follow any responses to this entry through the RSS 2.0 feed. You can skip to the end and leave a response. Pinging is currently not allowed.