Wire Troll: Playing for the Playoffs 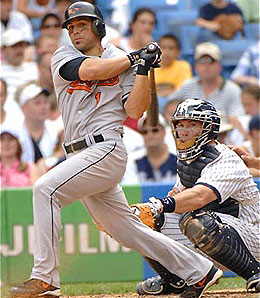 With playoffs around the corner, you can’t be afraid to be unsentimental. James cut Brian Roberts because he’s been scuffling for a month.

Okay, so it is playoff time, and most head-to-head fantasy baseball leagues are in the first round right now. Add to that the fact that Week One of the NFL season has kicked off. So, don’t worry, your buddy James is here to help you with your baseball waiver wire picks while you focus on the NFL.

The key to winning your fantasy baseball playoffs is simple — waiver wire, waiver wire, waiver wire. Keep on top of who is hot and who is not, and you have the best shot at winning from week to week. I just cut Brian Roberts for Jack Wilson in one league because Roberts has been horrible over the past month and Wilson is not looking all that bad. The cardinal rule in fantasy sports is to never fall in love with your players, and there is no more important time to follow that rule than now. So, let’s check out what I see in that crystal ball of mine for the upcoming week.

Matt Stairs: I would normally never advise getting Stairs, but over the past 20 at-bats, he has scored six runs, hit two dingers, and driven in 10 runs to go with a .500 BA over that time (10-for-20). Now, don’t expect him to hit this way the rest of the year as his September batting average over his career is just .255 — one of his poorer monthly split. But, A-Rod traditionally has dropped off in the second half and isn’t doing so this year (although for a while it looked like he was). So, I’d take a ride on the Stairs railroad while the train is moving in the right direction.

Jack Wilson: This was one that I was a little uneasy about saying because so many people think I am in really shallow leagues with some of the guys that I say are available. But Wilson was available in all four of my Yahoo leagues as of 6:30 a.m. MST Saturday morning. Over the past week, he has hit to the tune of 14-for-23 (.609 BA), scored six runs, hit two home runs, knocked in nine runs, and stolen one base. From the SS position, that’s about as good as it gets, folks. If you see that you have Jose Reyes and he has slumped over the past week (which he has), give Wilson a shot if there is someone you can cut on your roster.

Jacoby Ellsbury: Now, this kid is smoking red hot right now and the Red Sox know it. It is his .500 BA (11-for-22), seven runs scored, two taters, six ribbies, and three stolen bases that caught my eye. If you are on the East coast, you might already know who the kid is. But, if you live outside of a 100-square mile radius of Boston, you have a shot at picking him up if you hurry. As long as he continues to impress, Ellsbury gives Boston little choice but to include him in its every day plans. (Of course, it helps that Manny Ramirez is dealing with his seemingly annual late-season injury issues.)

By James Morris
This entry was posted on Saturday, September 8th, 2007 at 10:46 am and is filed under BASEBALL, The Wire Troll. You can follow any responses to this entry through the RSS 2.0 feed. You can leave a response, or trackback from your own site.