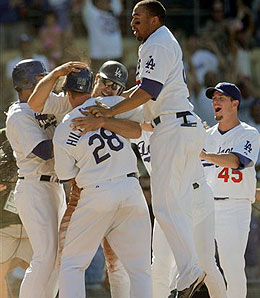 Shea Hillenbrand (28) has had a forgettable year, but he was a difference maker for the Dodgers last night. (AP Photo/Reed Saxon)

How ironic is it that the Dodgers, who looked dead in the water a couple of weeks ago, have suddenly turned things around and gotten back into the race since picking up Shea Hillenbrand? Now, let’s get real. I’m not suggesting that Hillenbrand – who, as we are all aware, knows a thing or two about sinking ships – is behind the Dodgers’ recent resurgence, but it’s an interesting twist. Overall this year, he certainly hasn’t lived up to his 18th round billing in our pre-season draft, but in the last two games, Hillenbrand has shown what he’s capable of, going 4-for-9 with five RBI. Not only did he hit his first homer as a Dodger Wednesday night, but his 12th-inning sac fly delivered the game-winning run and helped LA to a three-game sweep of the Nats. With four straight wins and 10 victories in 14 games, the Dodgers have shaved their NL West deficit to just 3.5 games, setting up a fun September race. We’ll check in more on the NL West in our next D-Backs report, coming soon.

It looks as though Jeff Kent is waking from his August swoon and is ready for a big finish. There’s been talk his bat has slowed as the dog days of August have hit, but after a huge game last night – 4-for-5 with three runs and two doubles – Kent appears to be coming around. He enjoyed a 7-for-11 series against the Nats, with six runs, two RBI, two doubles and a homer. It’s been a wacky year for Kent owners, trying to figure out when to roll with him and when not to. After beginning the season very well (.319 BA, 850 OPS in April), Kent hit just .225 in May, although he maintained his value with six homers. In June, the power dried up and his BA didn’t exactly bounce back much. But then, he was perhaps the NL’s best player in July, batting .447 with five homers and 20 RBI (we recommended buying low on him at the beginning of June, and were apparently just a couple of weeks off). Just as fast, Kent went right back in the tank this month, until showing signs of life this week. Overall, it’s been a solid year for the veteran keystone cornerman as he’s not only stayed healthy, but has reached 70 runs for the 10th time and 70 RBI for the 11th time. With 50 walks against just 51 strikeouts, Kent’s batting eye has never been better. And last night, he added to his Hall of Fame credentials, as the two doubles gives him 534 for his career, tying him with the immortal Lou Gehrig for 27th place all-time.

On the plus side, the Nationals haven’t been nearly as bad as everyone expected. Surprise performances from several pitchers plus a resurgence from Dmitri Young has helped avoid what many thought would surely be one of the worst seasons on record. Unfortunately, it appears this team is going to limp to the finish line. After getting swept by the Dodgers, the Nats have now lost six in a row and are just 3-11 in the past 14. Finding silver linings hasn’t been easy, but how about Saul Rivera? The veteran has emerged as a quality set-up man the past two years, and although he took the loss last night to drop to 4-5 and snap a streak of four straight scoreless outings, 2007 has been a successful year as Rivera becomes a more integral part of the Washington bullpen. In a deeper NL-only league that counts holds, Rivera could be useful.

Eric Stults’ days of starting for the Dodgers are over for now with the acquisition of Esteban Loaiza. Stults had thrown two strong starts in a row, especially his August 17th outing, when he was spectacular, but he was hit hard and suffered a breakdown in control on Saturday and will now head to the pen. Stults has shown enough this season to be considered for a starting job next spring.

Considering he’s Canadian, I really say far too little about Russell Martin. That’s got to change. He’s now established himself as the top fantasy catcher in the game, and despite his massive workload, continues to thrive and develop his overall offensive game. At a time when most catchers – especially those with as much mileage this season under their belts as Martin has – are slowing down, Martin keeps raking. After two hits last night, including a home run, Martin has now hit in five straight, going 7-for-14 with five runs, two doubles, two homers, four RBI and a steal. He’s also walked six times. A 24-year-old catcher batting almost .300, closing in on 20 homers, who has 21 steals (11th in the NL)? That’s gold, baby.

James Loney snapped a 3-for-17 skid with two hits, a walk and four RBI last night. He’s made nice strides at the plate this year and has been productive even though his power development has been disappointing. Unfortunately, Loney has slowed down substantially since the break, so hopefully this will kick start a nice streak.

Since we last checked in on Austin Kearns, he’s picked up the pace. On his current five-game hit streak, Kearns is 7-for-19 with four runs and a couple of ribbies, taking his BA up to .305 for the month with four homers. A strong finish would be nice after such a disappointing year in which Kearns reached 30 doubles for the second straight season, but hit homers at a lower pace than ever before. His walk rate has also suffered this season.

By RotoRob
Tags: Shea Hillenbrand
This entry was posted on Thursday, August 30th, 2007 at 12:34 pm and is filed under BASEBALL, Fantasy Notes. You can follow any responses to this entry through the RSS 2.0 feed. Both comments and pings are currently closed.