Dear RotoRob: Time to be Tested 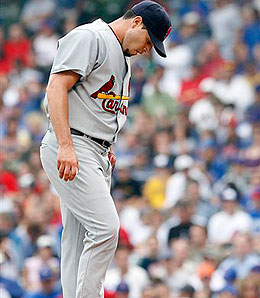 Note from the editor: If you’ve sent in a question to James recently and he hasn’t answered in his usual expedient fashion, it’s because he’s out of commission at the current time with some medical issues. We wish him a speedy recovery. In fact, the team is having its issues currently, as RotoRob suffered a dislocated shoulder in his game last night and is reduced to one handed typing.

You have 10 minutes for this test. Keep your eyes on your own paper. Please do not open this test until after the weekend so that you can use information you’ve gathered on Saturday and Sunday. You may begin on Monday. Good Luck. (National League only.)

You can grab up to four extra players in a couple of weeks. At this point who would it be (if any) from the following?

Do you think I need to study for such a test or something? Do you not know that I have stats and fantasy numbers crammed into my head as part of my common knowledge? You know the Earth rotates around the sun; I know that loyalty has no place in fantasy sports. Now, allow me to ace your test…and I will show my work even though it was not required!

1. Which is the better ratio, 2/1 or 5/1? Why does it matter? What am I talking about, grasshopper? Well, Pineiro has a 5/1 K/BB ratio, whereas Redding has a 2/1 ratio. St. Louis is in a better position than Washington to be playing for something the rest of the way out. So, I have to go with A) Pineiro over B) Redding. Williams is 40 years old and not a very good option even in NL-only leagues. Stats are stats, but age is age.

2. Of the guys you listed there, I would say that if the Izturis were Maicer Izturis, then I would take him. But, since it is Cesar Izturis, I leave him and his hollow batting average alone. Wilson is a good option for a back-up SS. From there, I leave the other three spots open and read The Wire Troll. The guys you mentioned are very low end pick-ups in even an NL-only league. There are some guys I have my eye on that you also might look at (they are all available in my leagues right now for the most part): Nate McLouth, Jeff Keppinger, Dave Roberts, Conor Jackson, Geoff Jenkins, Luke Scott (has an injured groin) and Matt Diaz.

By James Morris
This entry was posted on Thursday, August 23rd, 2007 at 10:31 am and is filed under BASEBALL, Dear RotoRob. You can follow any responses to this entry through the RSS 2.0 feed. You can skip to the end and leave a response. Pinging is currently not allowed.