Around the NL: Hoffman Struggling 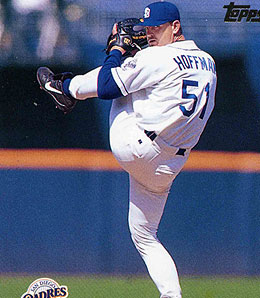 After blowing the save when he gave up four hits and two runs while recording just one out in the bottom of the ninth last night, Trevor Hoffman’s struggles of the past couple of weeks are starting to become mildly concerning. He’s been scored on in four of his past five outings, suffering two of his four blown saves (in 35 tries) this year along the way. Since August 5, Hoffman has been burned for 10 hits and six runs – five earned – in 4 1/3 innings while walking three. His ERA has risen over eight-tenths of a run to 2.49 as a result of this stretch. With just 30 Ks in 43 1/3 innings, this marks the fourth straight season that his strikeout rate has declined, and that’s the big concern from my perspective. It’s one of the reasons why I parted with Hoffman in my keeper league this season in return for some young pitching. Sure, he’s the all-time saves king, but everything has to come to an end one day.

The big come-from-behind win over Hoffman and the Padres allowed the Mets to retain their lead over Philadelphia and increase the gap over Atlanta to six games.

Aaron Rowand’s two-run homer last night not only helped the Phils down LA, take over sole possession of second place in the NL East and move into a tie for the NL Wild Card lead, but it allowed him to reach 70 RBI for the first time in his career. He’s struggled in August (.210 BA), yet has continued to go deep, with five homers. Rowand is up to 21 dingers, giving him an excellent shot of passing his career best of 24, set with the White Sox in 2004. He’s actually cut his strikeout rate a bit this season, and that’s helped him enjoy one of the finest seasons of his career. The Phillies, just starting a 10-game homestand, have a chance to put some distance between them and the Braves, while perhaps taking control of the Wild Card race and putting some pressure on the Mets.

The Dodgers came out of the All-Star break looking like they meant business, winning four straight. Since then, they have undergone an 11-21 collapse, yet remain just 2.5 games out in the Wild Card race, so there’s plenty of time to right the ship.

Jose Reyes’ up-and-down season continues with another hot month. In April, he scorched out of the gate with a .356 BA before stumbling in May (.268). In June, Reyes turned it back on, batting .330, but then he faltered in July (.265). Now, after a two-hit game last night, he’s up to .296 in August. Are you sensing a pattern here? Overall, it’s been another season of progress for the best shortstop in the game. Not only has he again remained healthy, but Reyes has seen improvements in both his strikeout rate and his stolen base success rate. His OPS might be down a smidgeon from 2006, but there are plenty of things to like about what Reyes is doing this season.

Mike Cameron enjoyed a nice night Tuesday with a pair of hits, including a homer and a double, but what’s caught my eye is the amount of times he’s been walking this month. With two more last night, he’s already drawn 13 walks in August – more than any other month, with another nine days to go. Cameron has stayed healthy this season, but it hasn’t particularly been a strong year for him in any sense. I have a feeling he’s going to amend that over the final six weeks if he continues to show this kind of patience.

While the Phils continue to peck away at a playoff spot, they also suffered a potentially devastating loss with word that Cole Hamels is headed for an MRI on his elbow today. As it is, he may miss two starts because of a mild left elbow strain, but depending on the MRI results, Hamels could be knocked out for as long as three weeks. I suppose the Phillies should be used to bad news this season, especially from the pitching ranks. Brett Myers, Tom Gordon, Ryan Howard, Chase Utley, Freddy Garcia. Adam Eaton and Jon Lieber have all been hurt to varying degrees this season.

Speaking of Myers, he looks like he’s settling into a groove with three straight perfect outings for saves. Since the break, he’s recorded a 2.53 ERA and has slowly whittled away the ugliness of his April ERA. I was skeptical at first, but Myers seems to have really taken to closing, and his level of domination has gone up even more than expected with 45 Ks in 31 1/3 innings since he was yanked from the rotation.

Gordon is also looking better, with scoreless appearances in five of his last six outings after a rough start to the month. It’s been a tough year for Flash owners, given his injuries and problems with the long ball, but I’d wait to see what he’s capable of doing down the stretch before deciding whether he’ll be of any use in 2008.

Howard came through with a nice game last night, going 2-for-4 with a run and even swiping his first base of the year. Man, did he need that. He had been stuck in a 6-for-40 rut, batting just .167 in August before last night – a major letdown after RyHo’s huge July. The power drop off isn’t a huge shock, but the fact that he’s batting only .260 this year is quite surprising.

It’s only been a few weeks, but it behooves us to give credit to Jason Kendall for turning things around since he landed with the Cubs. After a 2-for-3, two-RBI performance last night, he’s now batting over .300 as a Cub, and he’s been productive, even flashing some of his old extra-base pop – something Kendall hasn’t displayed since he was a Pirate. If he suddenly starts stealing a lot of bases, he’ll begin to make me wonder about his 2008 value, something I previously believed was next to nil.

By RotoRob
This entry was posted on Wednesday, August 22nd, 2007 at 11:40 am and is filed under BASEBALL, Fantasy Notes. You can follow any responses to this entry through the RSS 2.0 feed. You can skip to the end and leave a response. Pinging is currently not allowed.