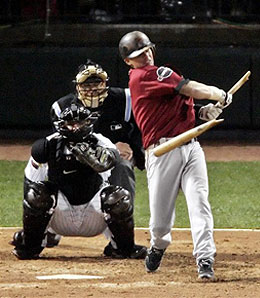 Craig Biggio’s once-potent bat has splintered over the last couple of years, prompting him to announce he’ll pack it in at season’s end.

For the next few days, we’re subbing in for Aaron Gleeman with the Daily Dose, reprising our role from last September, so expect plenty of baseball coverage between now and Monday.

Craig Biggio has finally announced that 2007 will be his swan song. It became pretty obvious that he’s been hanging on to reach the 3,000-hit plateau, and now that this milestone is in the rear view mirror, his retirement is logical. Does that tarnish his HoF career? No way. In today’s Dose, we take a closer look at his announcement and his fantastic timing in playing the hero last night.

We’ve got injury updates on a trio of hurlers as well, including a fat man (Bartolo Colon) sandwiched between a pair of Chrises (Young and Ray, to be precise).

We deal with all this plus offer up a smorgasborg of fantasy tidbits in today’s Daily Dose.

By RotoRob
This entry was posted on Wednesday, July 25th, 2007 at 12:44 pm and is filed under BASEBALL, MLB Daily Dose. You can follow any responses to this entry through the RSS 2.0 feed. You can leave a response, or trackback from your own site.