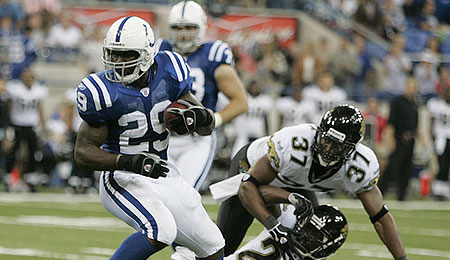 Joseph Addai, our 10th ranked player, hopes to leave plenty of competitors in the dust this season.

Welcome to the 2007 Fantasy Football Season. Training camps are getting underway, the rate of player arrests is slowing down, and I’m sure Terrell Owens will do something absurd any second now. That means it’s time for our early overall Top 10 fantasy player list. Derek and I came to a consensus (sort of) in compiling this list, so it’s got a good mix of reason (my parts) and silly vindictiveness (Derek’s parts). You might notice that Larry Johnson and Shaun Alexander aren’t on this list. We will be devoting entire columns about why they aren’t top 10 players in the near future, so try to contain your hatred of us for a little bit. Enjoy!

10. Joseph Addai — America’s new favourite running back is poised to have a breakout season, at least according to most fantasy football experts. Addai enters his second season as the lone soldier in the Colts backfield (sorry, DeDe Dorsey does not count yet). After fiddling around with New Orleans, Tennessee and Houston in the first three weeks, his schedule will get progressively more difficult. While Addai may not be a top five back yet, his number of touches will make him an attractive first round option.

9. Laurence Maroney — Thirteen touchdowns. That’s the number of scores that a rather old and moldy Corey Dillon usurped from Maroney in the 2006 season. With the clock-killer killing time at home now, one would expect Maroney’s goalline opportunities to skyrocket. Now that’s not to say Maroney will notch 20 touchdowns, especially since the newly-acquired Randy Moss will steal some goalline looks himself. But Bill Belichick has proven to be willing to roll with a successful running game, and Maroney stands to be the most dynamic backfield threat the Patriots have had since…well…since Dillon was actually good.

8. Brian Westbrook — Let’s see if Andy Reid sticks to his guns of running the ball more. Before last year, When Westbrook has been in the lineup with Donovan McNabb at the same time, he had only carried 20 times in a game once back in 2004. Look for Tony Hunt to steal some carries, but Westbrook will still be a big-time playmaker, assuming his knees don’t go first.

7. Rudi Johnson — I can’t argue with anyone who would take Johnson as high as, say, fourth or fifth in any average snake draft. Who else in the league will surely get 1,400 yards and 12 scores? There might be a few that could, but only LaDainian Tomlinson, Steven Jackson and Johnson are sure bets. That being said, Johnson has never been my team’s top back. And I doubt that he ever will be. The same consistency that separates Johnson from all but the cr

By Andy Goldstein
This entry was posted on Tuesday, July 24th, 2007 at 12:59 pm and is filed under Cheat sheets, FOOTBALL. You can follow any responses to this entry through the RSS 2.0 feed. You can skip to the end and leave a response. Pinging is currently not allowed.