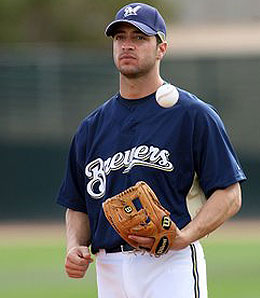 If Ryan Braun is still on your waiver wire, you better move fast.

We’re back with another installment of The Wire Troll. I’ve been a little preoccupied this week as I’ve been at the Danny Granger basketball camp. Look for a report on that experience soon, but in the meantime, let’s get to some who’s hot and why.

Ryan Braun: Over the past month, Braun has been hitting everything thrown at him, going 37-for-100 (.370 BA), scoring 22 runs, smacking seven home runs, and driving in 22 runs (not including his two-homer, four-RBI onslaught Friday night). Six steals is just icing on the cake. He is getting the starts, third base is a weak spot in many line-ups, and he is available in a few of my leagues right now.

Jonny Gomes: Now, I’ve cut him loose more than once myself. And, I am not sold on Gomes keeping up the pace he has shown over the past month. But, going 29-for-87 (.333 BA) with 14 runs, seven dingers, 18 RBI, and two steals is nothing to sneeze at. I’m not exactly sure I want to tell you to take a chance on him, but it’s hard to argue with those kind of numbers.

By James Morris
Tags: BASEBALL, Danny Granger, Fantasy Baseball, James Morris, Jonny Gomes, Milwaukee Brewers, MLB, Ryan Braun
This entry was posted on Saturday, July 14th, 2007 at 1:32 am and is filed under BASEBALL, The Wire Troll. You can follow any responses to this entry through the RSS 2.0 feed. Both comments and pings are currently closed.