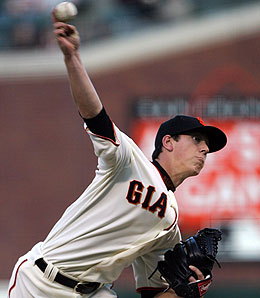 Tim Lincecum could be a great second-half choice if you’re a concerned Smoltz owner.

I’ve got a baseball question for you: With John Smoltz’s health up in the air, I was thinking I might want to scour the waiver wire to see what will be available if he does go on the DL. In our league we can only pick up a guy if one of ours goes on the DL. They will hold the spot for Smoltz while he is on the DL.

Some of my choices:

Do you have any ideas on who would be the best replacement for the second half of the season? Any help would be gladly appreciated.

It’s funny that you ask because I just got off the phone with Brad Ziegler from the A’s Triple-A team, who I was interviewing for a story on the site. He was talking to me about how much he likes Lincecum. If I were to pick up someone to hope for a big second half, Lincecum would be my guy after that conversation. The mere 13 hits and three runs he’s allowed over his last three starts and 20 IP doesn’t hurt, either.

By James Morris
This entry was posted on Friday, July 13th, 2007 at 6:30 pm and is filed under BASEBALL, Dear RotoRob. You can follow any responses to this entry through the RSS 2.0 feed. You can skip to the end and leave a response. Pinging is currently not allowed.