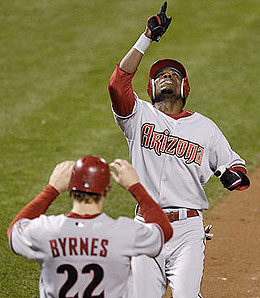 Orlando Hudson can thank the man upstairs for his all-star selection as he hasn’t exactly been swinging a mean stick lately.

Time to file our weekly Diamondbacks Report, courtesy of the ‘Zona boys at azsportshub.com.

The break couldn’t come at a better time for the Snakes as they’ve dropped five straight and eight of their past 10 to finish the first half just four games over .500, good for third place in the NL West. This club was 44-32 on June 24, but is just 3-11 since and now finds itself closer to the fourth place Rox than the third place Dodgers. Still, with just 2.5 games to make up in the Wild Card race, this is no time to panic.

The culprit behind the venomless Snakes these days is hitting, or lack thereof. Notwithstanding the seven runs they put up in the final two games before the break, the Diamondbacks had managed just 18 runs over their previous seven – barely two and half per game. Suddenly, there are just four NL teams will less runs this season than ‘Zona. Clearly, that ain’t gunna get it done.

I’d say hitting coach Kevin Seitzer better get his act together pronto otherwise he won’t be making it through his first year at the helm of the Snake sticks.

Of course, there are plenty of underperformers on this team, but this past week Arizona shipped out one of the biggest offensive failures, Quentin. The D-Backs showed plenty of patience here, giving him 200 at-bats, but it became clear that Quentin wasn’t going to snap out of it, batting a mere .210 with a complete lack of power (five dingers). We’re talking about a kid who slugged .530 as a rookie last season so his .350 SLG mark this year was a huge disappointment. It’s early days, but Quentin isn’t pouting at Tucson, delivering three hits including a double in his first two games since the demotion. He’s still a very big part of this team’s future.

Jeff DaVanon could have taken advantage of Quentin’s demotion to reestablish himself in the team’s plans, but he’s still playing in the Cal League on an injury rehab. So that opened the door for former Rockie prospect Jeff Salazar, grabbed off waivers prior to the season. Salazar, who had been batting .301 with 50 RBI down on the farm, has fit right in with a 3-for-10 start. These days, that qualifies him as a stud on the D-Backs. Salazar made him MBL debut with the Rox last year, recording a fine 824 OPS over 19 games while showing a bit of pop. I still Hairston’s chances of benefiting from Quentin’s demotion here, but for now Salazar is worth a look against righties.

The highlight, or rather lowlight, of the current skid came on July 1 when Arizona was beaten like a stepchild 13-0 by the Giants, enduring the worst shutout loss in franchise history. It was also the most runs the Diamondbacks had served up since August 24, 2005. Micah Owings had been holding his own, hurling three shutout innings before running into problems in the fourth when he gave up a pair of runs. Then, the wheels came off – six runs in the fourth, five of them charged to Owings.

He was only marginally better in his next start on Friday against the Reds (4 2/3 innings, six hits, six runs, three homers, three walks) and since mid-June, Owings is looking like a weak link in the rotation. He has no problems getting through the first three innings of his starts (.219 BAA), but in innings four through six, Owings is getting bitch slapped to the tune of almost .350. If this trend continues, his future may be as a long reliever. Perhaps it will be Owings, not Yusmeiro Petit (who pitched shutout ball into the sixth on July 3), whose rotation spot will be in jeopardy whenever Randy Johnson is ready to return. (Speaking of which, didn’t I mention quite some time ago that this Johnson situation didn’t sound good? Three times on the DL already this season? Petit could be a good speculative pickup if you believe, like I do, that the Unit is in trouble.)

Conor Jackson’s less-than-sparkling D continued as he made an error that led to four unearned runs on July 2 as Arizona was again hammered, this time by the Cards, 11-3. Jackson has already made seven errors with a .986 fielding percentage, down from last season’s .990 mark when he committed a dozen miscues in 129 games. He’s said he’s willing to play some outfield if it will help with lineup decisions (thereby allowing Tracy to handle first and letting Mark Reynolds play third), but judging by his woes at one, perhaps that’s not a wise decision. Jackson, you may recall, was originally an outfielder, drafted in the same first round in 2003 in which the Diamondbacks plucked Quentin in what was supposed to be two-thirds of their outfield of the future. At the plate, Jackson has slipped badly since his blazing May. Forget about finding him other places to play; perhaps it’s simply time for him to get some days off.

Arizona launches into the second half on Friday, and it better bring its “A” game right from the get-go. A critical three-game home set against the NL West-leading Padres awaits so we’ll probably know immediately where this team is headed. Anything less than taking two of three – while not crippling – could certainly spin this club further off course, especially with a seven-game road trip (Milwaukee, Cubs) to follow.

It’s just a few games, but so far this month, Miguel Montero is showing signs that he’s finally ready to contribute offensively. He’s hit safely in five of six games (7-for-20 overall) with a double, a homer, three runs and three RBI. Montero is a more patient hitter this season, and he’s making excellent contact with just 20 strikeouts in 51 games. He only played 36 games at Triple-A before landing in Arizona, so patience is the key here, but remember that he was a .291 career hitter in the minors. If Montero’s bat comes around in the second half, he’ll secure the starting catcher job and it will provide a big boost to the attack.

By RotoRob
Tags: Arizona Diamondbacks
This entry was posted on Tuesday, July 10th, 2007 at 9:25 pm and is filed under BASEBALL, RotoRob correspondent report, Team report. You can follow any responses to this entry through the RSS 2.0 feed. Both comments and pings are currently closed.