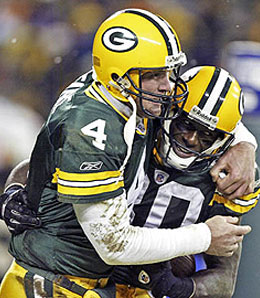 Oh sure. Donald Driver (right) and Brett Favre are buddies now, but what happens if Favre find a new target to throw to?

I like to pretend I know football. When Andy and Derek aren’t looking, I’ll sneak in the occasional football article to hone my skills. Please don’t tell them.

Today, I want to look at busts. Well, actually, I really like to look at busts everyday, but today, specifically, I’m going to toss out a few names that could be fantasy football busts this season. No doubt that Andy and Derek will soon be compiling the real RotoRob 2007 NFL Fantasy Busts list as they did last year, so consider this a teaser.

Donald Driver, WR, GB: The Donald racked up a career-high 1,295 yards receiving last season and he’s been quite consistent in recent years. But he’s getting a bit long in the tooth, and as he faces incessant double teaming, it will create opportunities for some of the Pack’s younger receivers. Should one of them curry favour with Brett Favre as a receiving option, whatever gains they make will come at Driver’s expense.

Reche Caldwell, WR, NE: Okay, okay, so this is a throwaway choice. After all, Caldwell took a big step forward last season with 61 receptions and 760 yards. Of course, that was during a season when I might have been an attractive target on the Patriots’ receiving corps. This season, the team has added everyone short of the ghost of Lance Alworth (what’s that? Alworth isn’t dead? Well, you get my point) to its receiving unit, something that should render Caldwell about as useful as this bust, in that he looks good in a uniform, but really doesn’t offer much in the way of functionality.

Trent Green, QB, MIA: Green really only has one way to go but up after a disastrous and injury-filled 2006. But he’s going to turn 37 next month, is headed to a new team and expecting him to return to his 4,000-yard days is foolhardy, especially considering the potential for injury. His own team doesn’t even have confidence in Green’s ability to make it through a season: ‘He’d better not get hit. One big hit, and he could be scrambled eggs,’ said DE Jason Taylor. Nice. I’d like mind with some toast and a side of peameal, please.

Marques Colston, WR, NO: Colston enjoyed a tremendous ‘ and quite surprising ‘ rookie season in 2006. But does he have what it takes to be the No. 1 target on the Saints, a job he’s being asked to fill this year? With Joe Horn gone, and Devery Henderson improving but still raw, Colston may be asked to bite off more than he can chew. He could again be a surprise and handle it with ease, but he could also be a flop. My money is on the latter.

Damon Huard, QB, KC: After posting the second highest QB ranking in the NFL last season, Huard may not even get to start for the Chiefs this year as it appears the team is leaning towards Brodie Croyle as their main man. Damn, Huard might not even get a chance to be a bust one season after taking over for an injured Trent Green and throwing 11 TDs against just one pick in 10 games. Obviously, you shouldn’t be paying for those kinds of numbers again.

By RotoRob
This entry was posted on Wednesday, June 27th, 2007 at 12:01 pm and is filed under Cheat sheets, FOOTBALL, RotoRob. You can follow any responses to this entry through the RSS 2.0 feed. You can leave a response, or trackback from your own site.