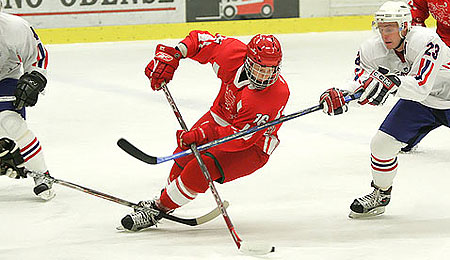 Lars Eller could turn some heads with his speed and skill.

With RotoRob hockey expert Mike Chen currently indisposed with a heavier-than-usual workload and a wedding to plan (he mumbled something about needing to go for his dress fitting), I’ll be cobbling together our NHL Draft Preview this year. Part One runs today, and Part Two will appear Thursday.

With an assist to Rob Reath, who supplied the Philadelphia Flyers perspective, we’ve attempted to throw down our thoughts on what you can expect to see this weekend in Columbus.

While this year’s crop of prospects includes several difference makers at the very top of the heap, the overall talent pool available is not expected to be able to compare to the depth of next season’s draft.

Apparently, finding prospective draft choices who have listed anyone other than the Rangers, Canucks or Wild as their favourite team is harder than building a Stanley Cup winner in Toronto. Only a couple are enamoured with the idea of being selected by the last-place Flyers. It’s a real dark period in the team’s history.

So instead of offering up the traditional mock draft, we’re going to spew out observations. Let the spewing begin.

We’ll be back with Part Two of our Draft Preview Thursday.

By RotoRob
This entry was posted on Wednesday, June 20th, 2007 at 2:49 pm and is filed under Draft report, HOCKEY, RotoRob. You can follow any responses to this entry through the RSS 2.0 feed. You can skip to the end and leave a response. Pinging is currently not allowed.