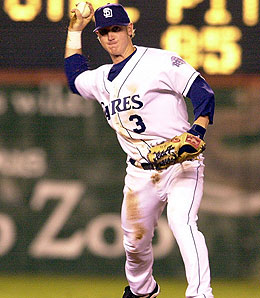 How does Khalil Greene stack up against other shortstops who may be available?

This week, we’ve got a pair of questions from Eddie, who wants help at short and is having a problem with his league and trade vetoing.

The shortstop spot is killing me. All things being equal, how would you rank these guys going forward: Ryan Theriot, Alex Gonzalez, Khalil Greene, Bobby Crosby and Yuniesky Betancourt?’

Thanks for keeping me in the top three of my league!

No worries, man. Just visit us every day and we’ll keep you rolling in your league!

All things being equal I would take them in this order: Betancourt, Gonzalez, Greene, Crosby and Theriot.

I really like Betancourt’s defense and BA. He won’t do a lot for you outside of hitting for average and maybe scoring 80 runs and driving in another 80. But, that .304 BA will keep you in the batting average lead. Gonzalez is more likely to score 100 runs and hit maybe 25 HRs, but the BA drops him down a bit in my future.

I use other spots for power and rely on my SS to bring up the BA and score the runs. Greene will get you the runs and could knock in 100 runs, but again, that BA is killing me. I couldn’t care less about Crosby and Theriot, although I will say that Theriot is the only guy of this bunch that should net you 20+ steals. Steals are nice, but Theriot isn’t locked into a starting gig and I am not big on having back-ups on the roster unless the league is pretty deep.

The first place team had three separate trades vetoed (all three were with different teams) in one day. They were as follows: He gave up Hanley Ramirez and got Vladimir Guerrero; he gave up Michael Cuddyer and Jason Isringhausen and got John Smoltz and Derrek Lee; he gave up J.J. Hardy and Erik Bedard and got Jose Reyes.

Now, I thought the Reyes deal was fine and fair, but I did veto the other two.’He’s now upset and vetoing out of spite (which he admitted in our league notes).’I had a trade accepted of David Ortiz, Jeff Francoeur and Garrett Atkins for Prince Fielder and Aramis Ramirez.’I have Carlos Lee, Gary Sheffield and Lance Berkman at OF so I could do a three-for-two deal, but it was vetoed as well.

Here are my two questions to you: What is your take on all of the above trades and what can the league do to calm itself down?’It is a H2H league by the way.

Deals one and two look like a team that is taking advantage of other teams or getting favorable deals from guys who know they are out of it. I would have vetoed the first two deals myself. Deal three I wouldn’t have made if it were my team, but I see the logic.

Now, what can you do to calm it down? Nothing. You got a guy who thought he had found Christmas in June and is now pissed that his team isn’t going to be as stacked as he thought. Maybe you can put soma in his coffee, but if deals are getting vetoed, more people than just him have to be pressing the veto button right?

He sounds like a kid kicking and screaming on the ground because he didn’t get that chocolate ice cream cone he wanted and he is going to make life miserable for everyone until he gets it. Unless you want to have him resubmit the deals and let them go through, I think you did the right thing in voting trades one and two down.

By James Morris
This entry was posted on Saturday, June 16th, 2007 at 2:57 pm and is filed under BASEBALL, Dear RotoRob, James Morris. You can follow any responses to this entry through the RSS 2.0 feed. You can leave a response, or trackback from your own site.