The Wire Troll: Jose Can You See? 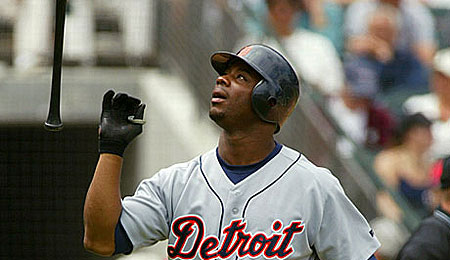 If you’re seeking a replacement for Craig Monroe and his five strikeout game, you’ve come to right place.

So, you’re the guy in the league that has Craig Monroe and his record-tying five strikeouts in a game and you want to replace him, huh? Let me guess, you are torn between this guy and that guy, and can’t seem to pull the trigger on either. Well, since Bob Barker had his last show, flip the channel over the Rotorob.com and read the Wire Troll to find out who you need to take a look at.

Jos’ Bautista, 3B, PIT: Bautista has been on a tear lately, hitting .306 with 26 runs, three HRs, 12 RBI and even swiping two bases over the past month. Another key consideration here is that he qualifies in Yahoo leagues both at 3B and in the OF. If you have a Jeff Francoeur, Carlos Beltran, Monroe and need to find someone to play while they ride this slump out, then I would see if I could drop a bench player and pick up Bautista while he is still white hot.

Kazuo Matsui, 2B, COL: Since Matsui has come off the DL he is starting to really look pretty playable in Colorado. He has hit .313 with 18 runs, one dinger, 12 RBI, and six stolen bases over the last month. I wouldn’t look for a lot of HRs or RBI from him, but the BA and SBs will be enough to keep him in the starting lineup for Colorado and for your team. Give him a look, as I picked him up since Brian Roberts has been slumping this last week.

Conor Jackson, 1B, ARZ: First basemen are a dime a dozen in any league, but I think Jackson has the skills to be a second-tier fantasy 1B sooner rather than later. I mean, hitting .326 with 16 runs scored, four homers, 16 RBI, and even getting a stolen base in the past month is enough to play while the Adrian Gonzalezes of the world figure out what is wrong at the plate. I picked him up in a few leagues while my starter is working out his kinks.

Sean Marshall, SP, CHC: I was combing over my waiver wires and saw Marshall on many of them. In the past month he has three wins, 27 strikeouts, a 2.12 ERA, and a 1.00 WHIP. That’s not too shabby for a freebie, so I took a chance. I would say that if you have Greg Maddux, Felix Hernandez, or Tim Hudson and you are tired of getting burned every fifth day when they take the bump, give Marshall a look as he can’t really do any worse than they have.

Rafael Betancourt, RP, CLE: Now, I hate recommending relief pitchers because they could completely implode at any moment a la Brad Lidge. However, Betancourt has been straight up filthy this last month, fanning 15 in 15 innings with a crazy 0.00 ERA and a 0.40 WHIP. It’s not that Betancourt is going to start getting saves, but if you need someone to eat up innings and keep the ERA of the team down, give him a chance.

By James Morris
This entry was posted on Saturday, June 16th, 2007 at 9:01 pm and is filed under BASEBALL, James Morris, The Wire Troll. You can follow any responses to this entry through the RSS 2.0 feed. You can leave a response, or trackback from your own site.