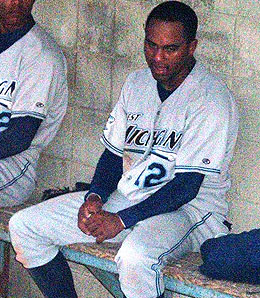 Despite stuggling at Double-A, former Tiger farmhand Juan Francia is delivering for the Scranton/Wilkes-Barre Yankees.

In one my 583 daily Google searches, I came across an interesting story about a Yankee farmhand who provided instant dividends after his first ever promotion to Triple-A last weekend.

Originally signed by Detroit in 1998 out of Venezuela, Francia looked like a mid-level prospect with top-of-the-order skills, stealing 53 bases with a .270 BA at the age of 20 in Low-A in 2002. Unfortunately, he stalled out in the Midwest League for three years, severely damaging his chances of ever becoming an everyday big league player.

Francia did break through in 2005 in his first action at High-A, batting .325 with 26 steals in 60 games before earning a promotion to Double-A, where he continued to excel with a .290 BA.

Last season, unfortunately, Francia took a big step backward. And when I say big, I mean Grand Canyon big. Try a 406 OPS at Double-A and a demotion back to High-A. It was looking like it would take some luck for him just to get to Triple-A. And if he did so, it would have to be with another organization after Detroit released him.

Despite switching to the Yankees organization this season, it didn’t look like much else had changed when he got out of the gates at Double-A Trenton with a whopping 419 OPS. But with Triple-A Scranton/Wilkes-Barre in need of a utility infielder, the now 25-year-old Francia got the call. So what happens? All Francia’s done is go 5-for-14 with five RBI, a walk and a steal in his first five games at Triple-A. If this keeps up, he may yet earn himself a cup of coffee in the Show one day.

Still with Scranton/Wilkes-Barre, a much longer-serving Yankee farmhand is still awaiting his first shot at the majors. Outfielder Bronson Sardinha, a sandwich pick (34th overall) in 2001, is still very much in the team’s plans after being added to the 40-man roster in November. He tore through the low levels in the minors, but struggled after arriving at High-A in 2003. Sardinha adjusted and made it to Double-A in 2004, but then stalled out for a while.

However, after a strong debut at Triple-A last year (.286 BA, .365 OBP, six homers), Sardinha’s doing nothing this season to justify the Yanks’ faith in him. A .211 BA, including just a .195 mark against righties by the land-handed hitting Sardinha isn’t exactly going to help him keep his roster spot.

The Hawaii native, brother of minor leagers Dane and Duke, is just 24, so could still wind up as a fourth or fifth outfielder one day. But he’ll need to pick things up offensively. A mini explosion last week of five doubles in four games suggests he’s headed in the right direction, but Sardinha hasn’t done nearly enough yet this season to warrant a September callup.

Finally, there was one other name that jumped out at me on the SWB roster. Former Mariner prospect Jamal Strong, a dominant presence in his early professional days, is still kicking around, now with his fourth organization. The 28-year-old outfielder, a sixth rounder by Seattle in 2000, was an All-Star in 2000 at short-season Everett when he swiped 60 bases in just 75 games to go along with a .314 BA and 790 OPS.

The following season, he was again an all-star — in two leagues. First at Low-A Wisconsin, after scoring 41 runs, stealing 35 bases, drawing 40 walks and hitting better than .350 in 51 games. Strong moved up to High-A San Bernardino and turned in another stellar showing with 74 runs, 47 steals, 51 walks, a .311 BA and .411 OBP in 81 games. The kid looked like a future star.

Strong enjoyed another solid season in 2002 at Double, and continued his success into 2003, making his MLB debut. Unfortunately, injuries starting cropping up that season, and over the years, his speed totals waned dramatically. In 2005, he got another 16 games in the Show in what proved to be his final season in the Seattle organization. Strong hasn’t been back to the majors since. Last year, he split the season between the Triple-A teams of the Cubs and Braves, but his numbers were weak.

Now in the Yanks’ organization, Strong has split the season between Double-A and Triple-A. He remains someone capable of drawing a walk — 30 in 54 games combined for a .405 OBP, but with just two steals in 27 games at Triple-A, he’s no longer a feared man on the basepaths. At this point, Strong’s best hope is to land a fifth outfielder/pinch runner gig, certainly a massive disappointment for a player who looked headed to stardom earlier in his career.

By RotoRob
This entry was posted on Friday, June 15th, 2007 at 2:21 pm and is filed under BASEBALL, Prospects, RotoRob. You can follow any responses to this entry through the RSS 2.0 feed. You can leave a response, or trackback from your own site.