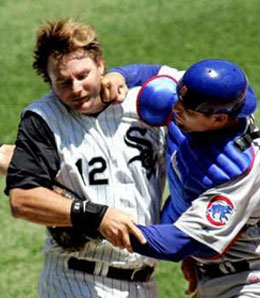 Let’s hope the current downtime being given to Michael Barrett, right, will stop him from going squirrelly again.

Those words were uttered by Lou Piniella, just 51 games into his tenure as manager of the Chicago Cubs yet sounding very much like a man resigned to his lot in life.

And after getting swept by Florida this week ‘ by a composite score of 23-7 ‘ small wonder he’s getting frustrated. Before Wednesday’s debacle, a 9-0 shellacking that gave the Fish the series sweep, there was a players only meeting and an executives only meeting, the latter of which was attended by Piniella and ownership, getting the tongues wagging that something is awry in the Windy City.

Piniella, with his 20 years of experience and 1,500+ career wins, was brought in ‘ as part of a $300-million makeover this winter ‘ to turn this team into a winner. Well, they are currently on pace to top last year’s 66 wins by about three or four victories, but that’s not exactly what they had in mind, was it?

Something has got to give here soon. Michael Barrett appears ready to snap, and is taking three days off to clear his head.

Of course, we discussed the Cubs’ situation back in April when things also weren’t going to swimmingly. But we’re now into June and the situation grows more tenuous by the day. This team has dropped four straight and eight of its past 10 to fall to 22-29. Fortunately, they are still tied for second in the woeful NL Central, a topic we discussed earlier this week, so the good news is there’s plenty of time to fix this.

It’s got to start now, however. The Cubs have a weekend tilt against Atlanta at Wrigley, and given that they are just 10-15 at home, and that the Braves have won the past four series in Chicago, an instant recovery may not be in the cards.

Let’s examine some of the storylines that are affecting this club at the time being.

By RotoRob
This entry was posted on Friday, June 1st, 2007 at 6:02 pm and is filed under BASEBALL, RotoRob, Team report. You can follow any responses to this entry through the RSS 2.0 feed. You can leave a response, or trackback from your own site.