The Wire Troll: Mad About Brad 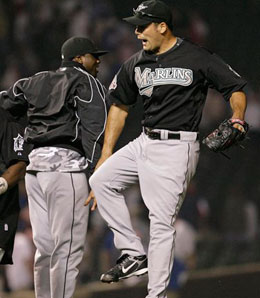 Kevin Gregg, who is expected to remain the Marlin closer for now, did a little dance when he learned he made the Wire Troll’s list this week.

With another week down, we’ve got another round of who’s hot and who’s not coming up for your reading pleasure.

First off, let’s deal with who is hot.

SP/RP Brad Hennessey ‘ Giants: With the Marlins trading for Armando Benitez, Hennessey looks like the guy that will step into the closer’s role until something better comes along. With a 2.82 ERA, 1.03 WHIP, and hitters batting only .226 against him, Hennessey looks pretty solid if you need saves.

RP Henry Owens/Kevin Gregg ‘ Marlins: I know the Marlins just traded for Benitez and Owens is coming off a DL stint. But, Benitez is 34 years old and has been getting hit hard this season. His 4.67 ERA and 1.50 WHIP in only 17 1/3 innings shows that. Fredi Gonzalez says Gregg will keep the closer gig for now, and I think Owens will set-up initially, but when the Marlins get tired of Benitez coming in and setting fire to the infield with his gas can, they may turn to Owens to close out games once again. This one could wind up being a closer-by-committee approach, which may limit the value of all three. If you currently own Owens, Gregg makes a good handcuff, and vice versa.

OF Mike Cameron ‘ Padres: Cameron has been flying under the radar in a lot of my leagues and I don’t see why. Over the past month he has scored 17 runs, hit five home runs, driven in another 20, and even managed to swipe four bases. If you can survive the hit in BA, Cameron isn’t looking all that bad if you need a third outfielder to fill out the roster.

Now, who do you buy low on?

2B Jeff Kent ‘ Dodgers: Kent is getting old, but he has hit no less than 22 dingers (excluding last year when he was hurt) for nine straight years. He may not be the sexy sleeper choice to buy low on since he is hitting .273 right now, but his .353 OBP and .481 SLG suggest that he will continue to improve as the season goes on. And, let’s not forget he is playing for his next contract extension too.

Okay, so this is where I get to tell you a story. Why? Because it is my article and I can do that if I want to. So, I was offered a trade this week. The guy offers me Barry Bonds for Manny Ramirez. Let me start by saying that I absolutely hate Bonds for what he (allegedly) did. But, this is fantasy baseball and I am in it to win it. I accepted the offer. What? Yes, that’s right, I took the trade. Since 2000, Man-Ram has hit 40 home runs three times, Bonds has done it five times (despite two injury-plagued years over that span). So far in 2007, Bonds looks healthy and is on a mission to break the most hallowed record in all of sports.

If you have an opportunity to trade for Bonds, I think you almost have to pull the trigger at this point. Once again, I am so not a fan of him, but I can’t ignore a .489 OBP and .587 SLG. I honestly think he will get better as the season goes on and he hits his stride. Certainly once he passes Aaron’s record, any mounting pressure (at least regarding that feat), will be removed. If nothing else, he will get you 100 runs, 40 or so home runs, and around maybe 85 to 90 RBI. Man-Ram is on pace for 25 HRs (I know it will come up), 85 runs, and 98 RBI.

By James Morris
This entry was posted on Saturday, June 2nd, 2007 at 2:01 pm and is filed under BASEBALL, James Morris, The Wire Troll. You can follow any responses to this entry through the RSS 2.0 feed. You can leave a response, or trackback from your own site.