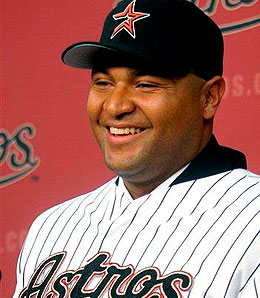 As fantastic as Carlos Lee has been this season, even he hasn’t be able to shake the Astros out of their nine-game losing streak.

You know things are going badly when you have a great chance to end a lengthy losing streak in dramatic fashion, up steps to the plate not only your best hitter, but the most productive hitter in the league, and you still fail.

Welcome to the problem that is currently the Houston Astros, losers of nine straight games after falling 2-1 to the Reds Tuesday when NL RBI leader Carlos Lee hit into a double play with bases loaded and one out in the bottom of the ninth to end the latest frustrating setback in the club’s longest losing streak since September 1996.

Astros fans, I have some good news and bad news for you. Let’s start with the bad news: another loss to the last-place Reds tonight will mean Houston will be just a game out of the NL Central cellar and will give the Astros their first double-digit losing skid in almost a dozen years. The good news is by having RotoRob write about how bad your team is, you’re pretty well guaranteed to immediately launch into a winning streak. Just ask the Rockies, who have rhymed off seven straight wins since I bad mouthed them.

Houston was sitting at .500 (21-21) before the skid, and is still very much alive thanks to the rest of the division tanking things at the same time. Other than Milwaukee for the first five or six weeks of the season, no one really seems to have been able to garner any prolonged momentum in the NL Central. So the ‘Stros are tied for fourth and just a game and a half out of third. Again, a very salvageable situation, especially when you consider that it took just 83 wins to finish at the top of this division last year. The winner, you may recall, went on to take the World Series.

But with just 199 runs for and 241 against, the team’s 21-30 record cannot be considered unlucky. And there will be no cavalry in the form of Roger Clemens to ride in and rescue them this season. That Rocket has already launched.

The problem has essentially been on the offensive side of the equation. Lee, as discussed, has been all that, but the rest of the sticks have been horrible ‘ especially lately. During the losing streak, the club has scored all of 17 runs and is hitting a mere .220. Overall, the team’s pitching hasn’t been bad, but certainly nowhere near good enough to compensate for that kind of weak lumber.

It’s not going to take a major upgrade in offense to turn this thing around; after all, when the Astros score more than three runs, they are 18-8. Unfortunately, they average less than that, ranking third worst in the majors with just 3.9 runs per game.

General Manager Tim Purpura doesn’t believe his job or that of manager Phil Garner is in jeopardy. But during Garner’s tenure (despite leading the club to its first ever post-season series victory in 2004) the team has witnessed a steady decline after that great second half in 2004 when he guided them to a 48-26 finish. Houston won 88 games in 2005 and slipped to 82 last year. At their current pace, the Astros will win less than 70 this season. Might it be time for a managerial shakeup? With a .484 career winning percentage over 15 seasons, Garner isn’t going to be confused as Tony La Russa any time soon.

Alright, so you want details. Fair enough. Let’s start with the positive.

By RotoRob
This entry was posted on Wednesday, May 30th, 2007 at 3:13 pm and is filed under BASEBALL, RotoRob, Team report. You can follow any responses to this entry through the RSS 2.0 feed. You can leave a response, or trackback from your own site.