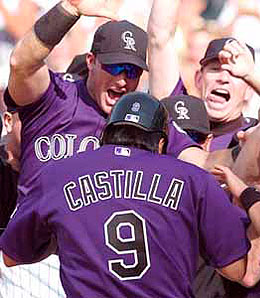 Colorado has struggled to find an identity — and a winning record — since Vinny Castilla’s first incarnation as a Rockie with the Blake Street Bombers.

Vinny Castilla, Andres Galarraga, Dante Bichette, Larry Walker. Ah yes, the Blake Street Bombers. No, I don’t imagine any of these men are Hall of Fame bound, but they represent the glory years for the Colorado Rockies. The days when an expansion team bashed its way to three winning seasons in its first five years and the only playoff appearance (1995) in franchise history.

Since those heady early days, The Rox have finished above .500 exactly once in nine years, and none at all since 2000.

And with a mysteriously ineffective offense, horrid pitching (especially from the pen), and a record of 19-27 ‘ good for dead last in the NL West ‘ the Rockies seem further away from glory than ever. The club began the year winning three of four before sliding into a 15-26 skid. Last night’s win puts the Rockies in position to win a series for the first time since taking two of three from Cincy almost three weeks ago.

There’s a groundswell of impatience brewing in the Mountains, one which could result in a major shakeup of the team starting with the club ownership, heavily criticized for its frugal ways.

So where did this all go wrong?

In 2000, the team won 82 games. Nothing earth shattering, but heavenly compared to last season’s 76 (which was considered progress). That offseason, the Rockies opened their wallets like never before and landed Mike Hampton, one of the top starters in the game, and Denny Neagle. Sure, other big-name starters like Bret Saberhagen and Daryl Kile had flopped in Colorado, but these two ‘ especially Hampton ‘ were going to carry this team to the NLCS. Or maybe not.

Since then, the team has never won more than the 76 games they cobbled out last season. Clearly, the Dan O’Dowd era (hired as GM mid-season 1999) hasn’t exactly been filled with pride. Clint Hurdle, the second manager on O’Dowd’s watch, has a 370-463 mark in six years. The reward for ineptitude? In April, each of them was given a two-year extension. Now, extensions don’t necessarily mean your job is safe anymore, but this is another head-scratching move by Colorado.

Where does that leave this team?

Well, let’s start with what’s gone right. It will be easier that way (sort of anyways; there’s less to say, but it’s harder to find).

Now, for the hard part (only because it involves more typing, but certainly less digging), namely, what’s gone wrong?

Obviously, something has got to give in Colorado very soon.

If this team has any designs on turning things around and finishing .500 this year, Colorado needs much better work from the bullpen and its starters, plus it has to find more offensive punch.

Or maybe it just needs to blow the whole thing up and start from scratch.

By RotoRob
Tags: Andres Galarraga, Colorado Rockies, Dante Bichette, Larry Walker, Vinny Castilla
This entry was posted on Wednesday, May 23rd, 2007 at 2:27 pm and is filed under BASEBALL, RotoRob, Team report. You can follow any responses to this entry through the RSS 2.0 feed. Both comments and pings are currently closed.