The Wire Troll: Dan’s the Man 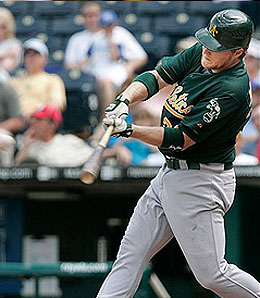 If Dan Johnson and his BA of over .400 are sitting on the waiver wire, you must pluck with extreme prejudice.

Well, another week down, four and a half months to go. If you are reading this you are either stuck and don’t know what to do or are like me and pick up the hot guys to prevent others from getting them. One way or the other, you are getting some good advice from a great site. So, let’s get to it!

1B Dan Johnson: The guy is raking over the last week, hitting .522 with three HRs, seven RBI, and eight runs. I know first basemen are a dime a dozen, but ride Johnson while the bat is hot. My friend played with him in Triple-A Sacramento last year and had nothing but good things to say about him. I’ve got to believe this is Johnson’s time to shine.

OF Jack Cust: Another Oakland standout over the last week. I don’t like him nearly as much as I do Johnson, but if you need a temporary outfielder while your horse is in the stable, take a look at Cust and his .316 BA, four HRs, nine RBI, and five runs scored over the last week.

OF Chris Young: This is a more risky pick since Young is so, well…young. Over the last week he has hit for a .455 BA, adding two HRs, three RBI, four runs, and one stolen base. The lack of numbers produced from the homers is what makes me think he is going to give you more of an empty batting average than a starting outfielder. Of course, he’s mostly been hitting leadoff or in the seven-hole, not exactly prime RBI positions. Certainly, batting leadoff will bag him runs, but, you never know.

SP Fausto Carmona: I know Rotoworld.com had him on its front page, but I’ve had my eye on him too. His ERA and WHIP have dropped over his last few starts and he looked pretty good in his last two games. I think picking the kid up and holding onto him might not be too bad of an idea if you need a starting pitcher.

If you need further help with the trades or waiver wire questions, send them on in to the Dear RotoRob section and I will see what I can do to help you further. And, if this article helped out, just come on back next week and let’s see what I have up my sleeve then!

By James Morris
This entry was posted on Sunday, May 13th, 2007 at 1:45 pm and is filed under BASEBALL, James Morris, The Wire Troll. You can follow any responses to this entry through the RSS 2.0 feed. You can leave a response, or trackback from your own site.