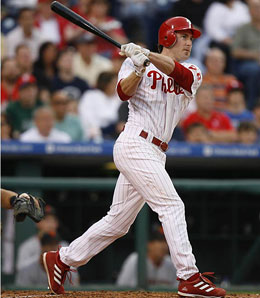 Chase Utley is a slam dunk at the top of our keystone corner rankings.

Second base can be pretty much summed up by the old, the new and the one true dominant player. Chase Utley is a Top 10 fantasy stud overall and probably dominates this position moreso than any position in the game today. So, without further ado, let’s ‘cut to the Chase.’

1. Chase Utley, PHA ‘ Let’s see, 32 homers, 102 RBI with a .309 BA and 132 runs scored last year and he even found the time to pilfer 15 bags. There is no doubt that he is a difference maker and is heads above the competition. Expect more of the same dominant numbers for ’07.

2. Brian Roberts, BAL ‘ Roberts had a bit of a slip in the power department last year, but I am anticipating seeing those HRs back in the 15 range for ’07. He’s not the flashiest of performers, but the combination of a decent BA, mid-teens power and those oh so attractive 25+ SBs makes him a very nice buy.

3. Robinson Cano, NYY ‘ Now where did that .342 BA come from? For a guy that doesn’t take many free passes (only 18 in 2006), that’s a very impressive number. I expect a bit of a drop in the batting average, but because he’s hitting in the power-laden Yanks lineup, I think he’s going to see some good pitches to hit down at the bottom end of the order. Twenty+ homers and 80 RBI is certainly not out of the realm of possibility here and at only 25 a very bright future is in store for Cano.

4. Rickie Weeks, MIL ‘ Hmm, the wrist, the hand and about 450 missing ABs over the past two seasons. All he needs is a bit of a break this year, or not as the case may be, and we could see a top tier 2B emerge. Weeks has all the tools, hits for power, runs well and should score a pile of runs hitting up top for the Brew crew.

5. Ian Kinsler, TEX ‘ I’ve been touting this guy as a stud in the making for the past two years and he is off to a truly monster start to ’07. He’s already closing in on double-digits in dingers and has four steals and we are still in April. We could be looking at a 30-homer, 20-steal guy, and hopefully at some point in time we’ll see him moving up in the order again where he’ll get more and better RBI chances. Hitting behind Sammy Sosa is not the answer here.

6. Marcus Giles, SD ‘ I believe the change of scenery is going to do nothing but good things for Giles in 2007. I am anticipating a rebound in BA his mid-teens power and SBs make him someone to target, but not overpay for in 2007.

7. Tad Iguchi, CWS ‘ Okay, RotoRob is right ‘ I do have a bias towards those former NPB players, but Iguchi has been a model of consistency his first two years in Chicago. Once Ozzie Guillen is finished with his current man-crush on Darin Erstad and gets Tad back hitting in the two spot, expect more of the same for ’07.

8. Dan Uggla, FLA ‘ Somewhere in the back of my mind I keep thinking Jorge Cantu whenever Uggla’s name is brought up. Not that the former Rule 5 player who came out of nowhere last year shouldn’t be an asset, I just believe expectations here should be tempered somewhat. A regression into the .260 range and high-teens power is more in line for 2007.

9. Josh Barfield, CLE ‘ He’s coming off a fine rookie campaign and the move to Cleveland should be a boost to his value. This youngster has a ton of potential, just be wary of the sophomore slump. Those SBs will certainly cost you at the draft or auction, but in a keeper environment especially, he could be well worth the price.

10. Orlando Hudson, ARZ ‘ Since June 2006, he’s been hitting a ton. High-teen power is certainly a possibility to go along with the smattering of steals.

11. Jeff Kent, LAD ‘ He’s closing in on 40 and his best days are most certainly behind him, but expect a bump back into the 20-homer range. Kent could end up being a relative bargain for ’07 depending on how speculative the other owners of your league are when looking at the younger players at this position.

12. Howie Kendrick, LAA ‘ He has great potential, and has most certainly proven his value with the stick at a very young age. Bump this guy up in keeper formats, but I think ’08 will be the year we’re all waiting for from Kendrick, especially since his 2007 has been already slowed with a hand ailment that will keep him out few weeks.

13. Ray Durham, SF ‘ His ’06 numbers were just a bit to out of line for my liking. With Durham heading into his late 30s, I can’t see that mid-20s power and 90+ RBI happening this year. Not that he won’t be a solid contributor, but realistically 15 and 70 look more like the norm here.

14. Luis Castillo, MIN ‘ Castillo has enjoyed a very nice rebound in Minnesota, with his highest SB total since 2002, but I am tempering my expectations here and think a regression in order. His value is most certainly tied to the running game and that turf is not going to be his friend in back-to-back seasons and in fact, he’s already dealing with quad issues this year.

15. Brandon Phillips, CIN ‘ Phillips got off to a great start in 2006, but he tailed off in a big way after the All-Star break. The relative price of those SBs when compared to the potentially low BA makes this pick a very risky one at best.

Two names that didn’t make the list yet are B.J. Upton and Kelly Johnson. Because we’re following the 20-game eligibility rule, neither of these players qualify yet, but both are most certainly worthy of mention here.

B.J. Upton, TB ‘ A ton of both attitude and talent here and, at his young age, Upton is most certainly worthy of a spot in keeper formats. It’s not out of the realm of possibility to see 25+ SBs from Upton this year, but those hands of stone he possess leads me to believe a future at DH is potentially an option.

Kelly Johnson, ATL ‘ Now here’s a guy I really like, and would probably have him penciled in as my big time sleeper for 2007 (if he qualified at 2B). Coming off a lost year due to elbow surgery, the former OF (and before that, a SS prospect) could score a pile of runs hitting in front of the Jones boys. I own him in three leagues and think those that gambled in this direction could be in for a very, very pleasant surprise.

Sleeper: Aaron Hill, TOR ‘ Very quietly, Hill put up a decent season in the Great White North. He hits for average and showed a bit of pop in September leading me to believe 2007 he could show off even more of his potential. A move to the two-hole in the batting order would certainly increase his value.

Deep Sleeper: Kaz Matsui, COL ‘ Okay, I’m showing a bit of bias again here, but Matsui seemed to settle in very nicely after arriving in Colorado last year. He was off to a great start with five steals and a .361 average before being sidelined with back issues. Is Jamey Carroll the answer here?

Rookie Watch: Alberto Callaspo, ARZ ‘ Okay, the guy has no full-time place to play right now in ‘Zona, but he’s certainly worth watching. The kid can hit, and quite possibly by year end could be one of those oh so valuable multi-position guys we all look for when those nasty injuries pop up (similar to what Alfredo Amezaga offered Florida last year).

By Tim McLeod
This entry was posted on Friday, April 27th, 2007 at 3:26 pm and is filed under BASEBALL, Cheat sheets, Tim McLeod. You can follow any responses to this entry through the RSS 2.0 feed. You can leave a response, or trackback from your own site.