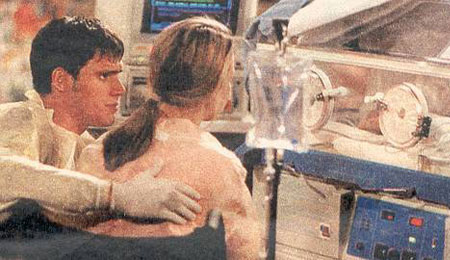 Noah Newman, born prematurely and forced to spend weeks in an incubator, grew up with no grasp of reality: He thinks Mark Prior is still an important player for the Cubs.

For those of you who aren’t addicted to the Young & Restless, there was a classic moment today. Noah Newman, a character who’s around 10 years old, desperately wanted his soon-to-be step father (who, disturbingly, was also once the step father to Noah’s dad, but I digress) to take him to a Cubs game.

“I want to see Mark Prior pitch,” he said.

Uh, sorry, kid. I have some bad news for you.

It’s awful nice that the writers on the show want to show how cutting edge they are and all, but it wouldn’t have taken a hell of a lot of research to know that Prior hasn’t been a going concern around Wrigley for quite some time.

Hey Noah, would you settle for Wade Miller?

By RotoRob
This entry was posted on Friday, April 20th, 2007 at 5:53 pm and is filed under BASEBALL, RotoRob. You can follow any responses to this entry through the RSS 2.0 feed. You can leave a response, or trackback from your own site.