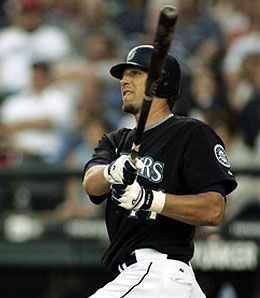 If you can ditch Richie Sexson for pitching help, go for it.

I need your advice once again.’I have Richie Sexson and I have been offered either Jon Garland or Kevin Millwood for him. I have Jeremy Bonderman, Matt Cain, Jake Peavy, El Duque, Roger Clemens and Jered Weaver. I am looking for another pitcher to fortify my staff.’What do you think?

I couldn’t care less for Sexson and his low BA/mediocre power. But, if you can get Garland for him, I might have to take a look at him for Sexson.

I also might look at someone like Kyle Lohse, Jason Hirsh, or Micah Owings. But, I don’t care for Sexson either way.

Thanks for the advice on the Ben Sheets and Scott Podsednik for Curtis Granderson and Dave Bush deal. I went for it and hopefully it will help.

I have another deal on the docket right now. A guy in my league has asked about one of my catchers. I have Victor Martinez and Kenji Johjima. He has offered me either John Lackey or Jason Schmidt or OF Gary Sheffield.

We of course have to trade position for position so I could offer him, if I want a pitcher, Scott Olsen and V-Mart or Johjima for Lackey and Jason Varitek or Chris Iannetta.

Or, I could go with Rocco Baldelli or Garret Anderson and V-Mart or Johjima for Sheffield and Iannetta.

It’s a tough decision as it’s hard to pass up on Lackey or Sheffield. I think both will do well and this owner is just delusional about their performance so far. I think Sheffield will produce when the weather gets warmer and Lackey and the Angels will also produce.

Should I just keep my good back-up catcher and ride out with my current SPs and OFs or should I take this guy to the cleaners and snatch up one of these good guys who are underperforming?

Any advice would help.

And thanks for all the help.

If he will take Olsen and Johjima for Lackey and ?. I’d want to see who you are getting back before I say yes though. When it comes to catchers, there are the top guys and the rest. And, there is a very big drop from one to the other.

I think Lackey is a top 10 SP (No. 10, but still top 10), and while Olsen is good, he is no Lackey. Johjima is going to get you BA, but not many HR or RBI. V-Mart is a top-tier C that would cost you a top five SP at bare minimum to get from me.

By James Morris
This entry was posted on Friday, April 20th, 2007 at 1:04 pm and is filed under BASEBALL, Dear RotoRob, James Morris. You can follow any responses to this entry through the RSS 2.0 feed. You can leave a response, or trackback from your own site.