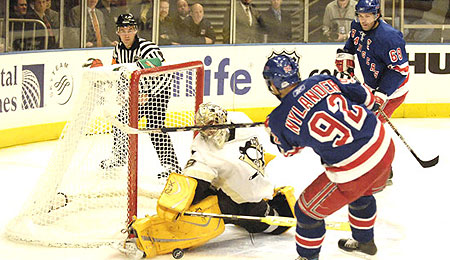 Michael Nylander and Jaromir Jagr teamed up to terrorize the Thrashers in the first round as the Rangers won their first series in a decade.

For the Rangers, their first playoff series victory in a decade came far easier than anticipated. For the Thrashers, the first taste of playoff action in franchise history was bitter.

New York’s 4-2 victory Wednesday capped off a tremendously lopsided series sweep as Southeast Division Champion Atlanta was outscored 17-6 in a battle in which it never really showed up.

That the Rangers won the series was not shock; after all, Mike predicted the Blueshirts would take this one in six. What was surprising was the fact that it was a sweep in which they were never seriously challenged.

New York’s return to the postseason last year after a seven-year drought didn’t go so well, as the Devils swept the Rangers in four. So for the Rangers, the sixth seed in the East, this was a tremendous turnaround, especially given that in late-February, they looked done for, sitting in 12th in the East and ready to miss out on the playoff tourney for the eighth time in nine years. Flash forward a few weeks and the team suddenly looks poised to make some serious noise in this postseason. In fact, if you’re a Ranger fan looking for good omens, consider that this was the team’s first sweep since 1994. And we all know what happened that year.

While Mike was off by a couple of games with his call of the Rangers in six, we sure hope you heeded his advice for a series sleeper to grab. He pegged Michael Nylander, and all the underrated Swede did was pot four goals and four assists while recording a +7 for the series. Those eight points have him currently tied for the playoff lead. Jaromir Jagr also came up huge, although a 2-5-7, +6 performance from a superstar like him didn’t exactly sneak up on anyone.

But beyond the offensive heroics of Nylander, Jagr and Fedor Tyutin (who has been a pleasant surprise with five helpers already), the Strangers received superb work between the pipes from Henrik Lundqvist. After a wonderful season in which he not only carried a major workload (70 games), but finished eighth in the NHL in shutouts and ninth in wins while recording a strong 2.34 GAA, Lundqvist was absolutely dominant in the sweep, recording a 1.50 GAA and a .939 save percentage.

Depending on how things shake out with the rest of the series, New York will face the winner of the Sens and Pens or Buffalo. Poolies should hope it’s Buffalo. Both Nylander (4-2-5-7) and Jagr (4-1-7-8) fared much better this season against the Sabres than they did the Sens (Nylander 4-2-2-4; Jagr 4-1-4-5).

By RotoRob
Tags: Mikko Koivu
This entry was posted on Thursday, April 19th, 2007 at 7:38 pm and is filed under HOCKEY, RotoRob. You can follow any responses to this entry through the RSS 2.0 feed. You can skip to the end and leave a response. Pinging is currently not allowed.