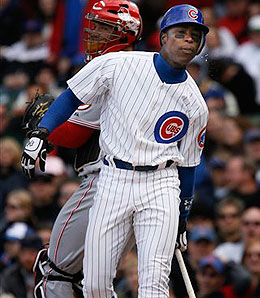 When will Alfonso Soriano start earning his $136 million?

Cubs fans can probably be excused if they are wondering when they will start seeing this remade club the organization promised them. You know, the kind of results that it’s reasonable to expect when your team spends $300 million over the winter.

However, at 4-7, with five losses in the past six games, the Cubbies are currently occupying an all-too-familiar perch at the bottom of the NL Central. Yes, it’s very early, but there have been some disturbing trends in the first couple of weeks of the season:

Yet, it’s not all doom and gloom. The bullpen, other than Erye and Bobby Howry, has been very strong. And the Cubs have a golden opportunity to right the ship immediately with a dozen consecutive games against NL Central rivals starting Friday. Winning seven or eight of those games will have a dramatic impact on the standings.

And if you’re desperate for something positive to focus on in Cubs land, why not take a look at the Triple-A team? The Iowa Cubs are currently tied for first in their division thanks a 6-4 start keyed by three straight wins over Round Rock.

If the Cubs should need some help, there are plenty of bats and arms down there that are off to excellent starts. Sparking the offense are a pair of non-roster players. Koyie Hill, now 28 and relegated to back-up status in Triple-A, has been splitting time at catcher with Geovany Sota, a player who does actually have a future. Hill is off to a big start, though, and his game-winning home run Sunday should help him continue to steal PT from Sota.

Micah Hoffpauir, a 27-year-old first baseman who has never played in the majors or even spent an entire season at Triple-A, looks like he’s on a mission to at least stick around Iowa. He leads the PCL in RBI.

Let’s not forget about the Cubs’ top prospect, Felix Pie. After stroking another three hits yesterday, he’s off to a .438 start. The Cubs are already having a hard time finding PT for Matt Murton, but the way Pie is making a mockery of Triple-A, the minors can’t hold him for long. The team will need to make some kind of decision here soon.

Iowa’s early-season strength has been its bullpen. And although that doesn’t appear to be an area the Cubs need help in yet, it’s certainly good to know that there are capable arms down there in the event of injury. Cory Baily, Federico Baez, John Webb and Rocky Cherry have all delivered noteworthy performances.

By RotoRob
This entry was posted on Monday, April 16th, 2007 at 12:52 pm and is filed under BASEBALL, RotoRob, Team report. You can follow any responses to this entry through the RSS 2.0 feed. You can skip to the end and leave a response. Pinging is currently not allowed.