Dear RotoRob: Do I Jettison the Rocket? 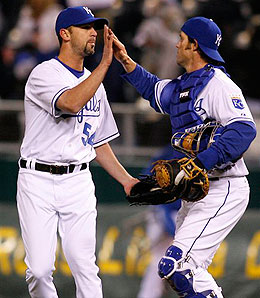 Not only was David Riske closing for Kansas City, it appears he and catcher Jason LaRue have some kind of tantric thing going on.

Here are two separate conversations between Dear RotoRob writer James Morris, Dan and Eddie. Not all the questions are always short or easy. But, here at RotoRob.com, we are eager to help you do your best to win your fantasy league, no matter how many questions it takes!

I have Octavio Dotel (who I put on DL and picked up David Riske in his absence), Armando Benitez and Billy Wagner for closers, so adding Owens could help. Should I drop Roger Clemens for him?

If you mean Henry Owens from Florida, I think he has the lead on the closer’s role now that Jorge Julio lost it. Do you drop Roger Clemens for him…hmmm..dropping a SP for a RP is a hard call to make. If you are weaker in saves, then I say go for it. Even if you aren’t, you can probably grab him and just pull the saves points all to yourself. I’d look and see if there was anyone else I could cut before Clemens for Owens. But, if he is the only one, then I might pull the trigger.

Patience is a virtue and I have none. It’s always been my downfall. Brett Myers has gotten shelled his first two starts this season; will he end up with a great season or should I dump him?

I have Myers myself in a league and have been battling my desire to cut him loose. He has given up five long balls in only three games, which means his next two starts are pivotal for me. I look at him as someone that may be good to snatch because of his low value at the moment. It is a risk, but I would stick with him and bench him until he gets settled in. Over the last three seasons, he has a combined ERA of 4.32, with 513 Ks in 589.1 IP and and OBA of .257. The ERA is a little more than fantasy GMs would like, but the BA against tells me his early season woes are not a sign of what he will do the rest of the season. Right now, guys are mashing him for a stat line of .349/.462/.860 (BA/OBP/SLG).

If you think that will keep up, dump him now. But, me, I will buy low on him now as I am sure he will turn it around. It is hard to tell what a guy will do until mid May at the earliest really. I’d keep him and bench him until he gets settled in.

Keep in mind that you may have answered your own question when you said up front that the fact you don’t have any patience has been your downfall. Pop a chill pill and see how things go.

I have Big Papi at 1B and Travis Hafner at UTL, so I had Carlos Delgado on the pine. I have a weak 3B duo of Alex Gordon and Freddy Sanchez (I alternate them usually). I wanted to get more power/RBI potential at 3B, so I traded David Weathers, Dan Wheeler and Delgado for Garrett Atkins and Tim Hudson. I also have Brian Fuentes, Bob Wickman and Al Reyes as closers, so I felt I could afford to send two in a deal. All things being equal (in a H2H non keeper league) how do you feel about this deal? Thanks as always for your awesome insight!

The problem I have with the deal is that you gave up two closers and a power-hitting 1B for a 3B and SP. I hate three-for-two deals because you give up more than you get back. That being said, Atkins should be a pretty good 3B for RBI and HRs since he plays half his games in Coors. Hudson is a solid SP that will eat innings and get you wins in Atlanta. I would say you will miss Weathers and Wheeler, but with three other good closers, I think you got what you wanted in the deal and I don’t see anything really bad about it.

By James Morris
This entry was posted on Monday, April 16th, 2007 at 3:03 pm and is filed under BASEBALL, Dear RotoRob, James Morris. You can follow any responses to this entry through the RSS 2.0 feed. You can skip to the end and leave a response. Pinging is currently not allowed.