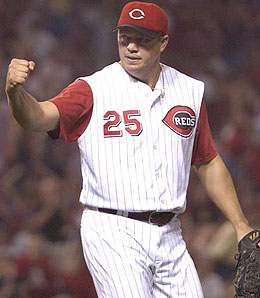 Now that Dustin Hermanson has been set adrift, David Weathers is the current favourite for saves in Cincy.

Shawn Weaver of the Cincinnati Reds Blog reports that with Dustin Hermanson being released, the early lead on the Reds’ closing job has been grabbed by David Weathers (who picked up his first save last night in convincing fashion), but that could change daily. Owners need to keep an eye on Mike Stanton as well, but there are plenty of dynamics at play in this bullpen.

Although he’s had just one at-bat so far, Josh Hamilton will get some PT as the main OF backup, and considering how fragile both Ryan Freel and Ken Griffey, Jr are, he could be a surprise.

By RotoRob
This entry was posted on Friday, April 6th, 2007 at 11:19 am and is filed under BASEBALL, RotoRob, RotoRob correspondent report. You can follow any responses to this entry through the RSS 2.0 feed. You can leave a response, or trackback from your own site.