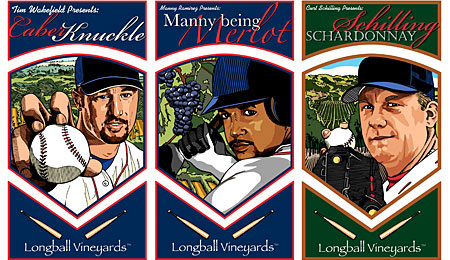 Here’s something to help you stop whining about the thumping the Bosox took on Opening Day.

It didn’t take long before we had our first Manny Ramirez “wining” story of the year. Except this time, it’s a good thing.

Manny, along with teammates Curt Schilling and Tim Wakefield, have teamed with Charity Wines to announce a new line of personalized wines, partial profits from each of which will go to a charity of the player’s choice.

Manny Being Merlot, Schilling Schardonnay and CaberKnuckle (I couldn’t make this stuff up if I tried) will each be launched in late-May or early-June, and $1.25 of the proceeds from each bottle will go to a specific charity close to the player.

Ramirez’s wine will benefit CHARLEE Homes for Children, which helps Miami-area children who have been abused, neglected or abandoned. Schilling’s vino will assist victims of ALS (Lou Gehrig’s disease), while money from Wakefield’s wine goes to Pitching In for Kids, an organization that helps New England-area children through sports-related events.

Thankfully, none of the players wanted their proceeds to go to MADD.

Personally, I love the idea of tying alcohol to charitable work and helping out those less fortunate than us. There’s just something so satisfying by knowing that when you polish of yet another bottle of wine — your fourth of the night — that the warm feeling you’re getting isn’t merely a result of you lying in a pool of your own urine.

The more you abuse the bottle, the more you’re helping abused children. It just doesn’t get any more gratifying than that.

By RotoRob
This entry was posted on Thursday, April 5th, 2007 at 3:03 pm and is filed under BASEBALL, RotoRob. You can follow any responses to this entry through the RSS 2.0 feed. You can skip to the end and leave a response. Pinging is currently not allowed.